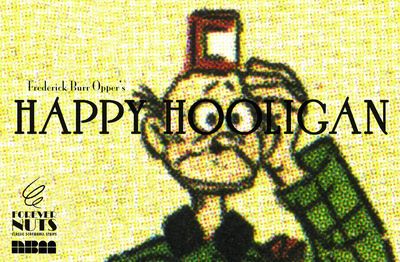 Just prior to Comic-Con International, NBM’s David Seidman sent out a note suggesting to reviewers that their just-released [[[Happy Hooligan]]] comic strip collection had been overlooked. [[[Gadzooks]]], I thought, he’s right and had them rush a copy over to be read. Having just finished the 112-page volume, I can say this early example of popular comic strip humor was undeservedly overlooked.

The better remembered characters from the comic strips have crowded the book shelves of late, from IDW’s exploding line to Fantagraphics beautiful year-by-year collections. Think of a character you grew up reading and odds are, there is a collection out there or one already announced.

But, the real pioneering strips such as Hooligan have been left behind. Under their Forever Nuts banner, NBM and Editor Jeffrey Lindenblatt seek to fix that, first with [[[Mutt & Jeff]]] and now Happy Hooligan. When a strip endures for 32 years, especially from that first era, it clearly spoke to an audience. Created by illustrator turned cartoonist Frederick Burr Opper, the strip followed a fairly strict formula but never ceased to be entertaining or inventive.

Back then, as explored in Cole Johnson’s closing essay, each strip had a gimmick and stuck with it. In this case, Hooligan, usually accompanied by his brothers, Gloomy Gus and Montmerency, saw something amiss, try to correct it and in so doing wind up causing trouble and usually being punched or jailed for his efforts.  Week after week this went on and the theme rarely varied until the strip was in its second decade. In six evenly constructed panels, Opper set things up and had them pay off in a breezy way while each panel was filled with business. Usually, Gus would see trouble coming and warn the reader, a role that was later filled his Happy’s three nephews (an idea lifted later by others, notably Carl Barks), and we never learned which brother was the father.

Opper would take his time with the strip’s stories, sending the trio of siblings to visit the world but just sailing from New York took months. In each country, Opper used cultural elements for his humor and invariably, the trouble would have him bashed and jailed as the international cast of gendarmes, cops, and other law enforcement types protected their people.

Later, Happy took on various jobs so the setting for the chaos altered but the gags rarely did.

Allan Holtz’s informative introduction gives us a look at Opper’s career and establishes why Hooligan and Opper succeeded. While producing the Sunday page, Opper through the years also wrote and drew accompanying features, totaling fourteen other strips until he put his brush down in 1932 when his eyesight failed him. During this career, he gave us a memorable character in Hooligan but also the immortal Alphonse and Gaston. It was Opper who began heavily using word balloons to convey dialogue as opposed to narrative surrounding the drawings.

Given the sameness of the strips to today’s readers, NBM wisely did not go the comprehensive route, but instead offers up a sampling of strips from 1902-1913, scanning the originals in their 2- and 4-color splendor. The book presents the strips horizontal, as intended, and the reproduction is solid. At $25, it’s a little pricey but the overall package and historic importance makes it worth a look.