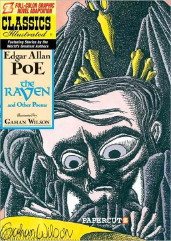 Comics don’t have to be bad for you, you know. They can be edifying and uplifting, partaking of the greatest glories of the finest books even written. At least, that’s what the purveyors of various adaptations of  “the great books” – curiously, nearly all of which were conveniently out of copyright and thus didn’t require any licensing fees – have claimed for the past fifty-some years. I have before me three very different books that all adapt mostly old and out of copyright works for a modern audience, so let’s take a look at what’s going on these days…

Classics Illustrated: The Raven & Other Poems

Classics Illustrated is the longest-running brand-name in the adapting-old-books space, dating back to 1941 (when the line was launched as Classic Comics), and was the educational comic of choice for an entire generation of parents (and the crib-sheet for their generation of children) until it ended, for the first time, in 1971. There have been periodic attempts to re-ignite the brand since then – this particular book was originally published during one of those attempts, by First Comics around 1990 – but none have been as broadly successful as the main thirty-year sequence from the Gilberton Company.

This particular book, [[[The Raven and Other Poems]]], is an outlier in the Classics Illustrated series, since it doesn’t adapt and abridge a single long-form story (usually a novel, with some plays or other works) into comics, but instead reprints, in their entirety, nine Poe poems with illustrations by Wilson. So it’s not really a graphic novel at all, but the kind of illustrated collection that any publisher for younger readers might publish. (It’s also quite short, at only 48 pages of Poe-Wilson material.)

Aside from “The Raven,” these are primarily shorter Poe verses, mixing his best-known lines (“Annabel Lee,” “The Conqueror Worm”) with poems that only Poe devotees will recognize, like “Lines on Ale” and “The Sleeper.” It’s inherently a small, scattershot selection, but it does give a decent sense of what Poe was like as a poet – morbid, ostentatiously wordy, with that galumphingly even rhythm through his long lines – so that new readers can decide if they like him or not. (And – who knows? – there’s always a new generation of morbid goth/emo kids to glom onto Poe, so it’s not the forlorn hope it might seem.)

Wilson is the perfect choice to illustrate Poe; he’s spent his long illustrative career in the realms of the humorously macabre, and his lines can be just as grotesque – and as carefully, deliberately so – as Poe’s. This isn’t new Wilson work, of course, but it’s a strong collection of Wilson illustrations, and it’s great to have them back in print. 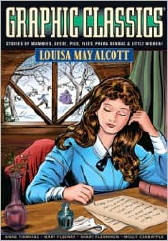 Tom Pomplun’s Graphic Classics is the most successful, and long-running, current series in the classic-adaptation space; this is the eighteenth volume within the past decade. Like the Gilberton Classics Illustrated series, Graphic Classics has concentrated on out-of-copyright writers, mostly from the 19th century, though Graphic Classics has also tended to run towards popular adventure writers (Rafael Sabatini, H.G. Wells, Bram Stoker, Mark Twain, Jack London, Robert Louis Stevenson) rather than the literary heavyweights like Dickens, Shakespeare, Balzac, and Tolstoy.

Alcott is something of a change of pace for the series, not least because comics have been a Boys’ Own Club for the last several decades and Alcott is the queen of the writers beloved by young female readers (and the women they grow up into). It’s a good sign for the health of the series that it can devote a volume to Alcott, and it implies that the main audience for these books is more likely to be found in youth librarians and similar gatekeepers for actual young readers than in the comic-shop Wednesday Crowd.

As is typical of the Graphic Classics books, Louisa May Alcott mixes two long adaptations with several shorter ones, and the lead long adaptation is, no surprise, Alcott’s most famous and popular novel, [[[Little Women]]]. Trina Robbins adapts this, using long captions to capture Alcott’s prose (in a wise gesture to the fans who have the book half-memorized), and Anne Timmons illustrates it in an expressive style reminiscent of mid-century girls’ comics.

The rest of the book, though, adapts Alcott’s other stories – not the sequels to Little Women, but her earlier and pseudonymous “sensation stories,” with their strong-willed heroines and updated Gothic trappings. The other long adaptation, by Antonella Caputo with art by Arnold Arre, is of “A Whisper in the Dark,” the story of a young heiress caught in a web of deceit, and two other stories – “Lost in a Pyramid” and “The Rival Prima Donnas” – also work the same territory. There’s also “[[[The Piggy Girl]]],” an obvious morality tale for girls with art by Shary Flenniken, and “Buzz,” a vignette from Alcott’s writing life with art by Mary Fleener.

The result is varied, but not necessarily in a good way. The Gothic sensation tales aren’t particularly important, and weren’t taken seriously even in their day. Presumably, Alcott fans would want a book with the kind of stories they like – longer adaptation of the stories of Jo March and her family, or the similar works Alcott wrote later in her life. Louisa May Alcott does provide a good sampling of Alcott&rsqu
o;s different kinds of writings, which is useful from a pedagogical point of view, but I wonder if it will please the kind of readers who would be excited by a collection of Alcott adaptations. 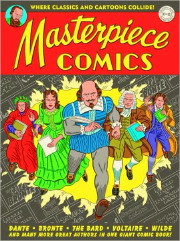 R. Sikoryak’s [[[Masterpiece Comics]]] is something else again, a deliberately postmodern mash-up of high and low culture in which great works of literature ([[[Macbeth]]], [[[Wuthering Heights]]], [[[The Scarlet Letter]]]) are re-contextualized in the styles of various iconic newspaper comics or comic books ([[[Garfield]]], [[[Blondie]], [[[Ziggy]]], [[[Little Lulu]]]). Sikoryak assumes that his audience will know the details of both works – will be as familiar with a Dick Sprang [[[Batman]][ as with Dostoevsky’s [[[Crime and Punishment]]] – as his sly comics mine the intellectual humor to be found in juxtaposing the two.

The short strips are the funniest and most pointed, since Sikoryak can hit one strong parallel, make it both cutting and funny, and then end. Masterpiece Comics opens with a strong sequence of these, moving from “Blond Eve” (Genesis-as-Blondie) to “Inferno Joe” (Dante-as-Bazooka Joe) to “Mephistofield” (Dr. Faustus-as-Garfield) and continuing through strips that smash together Macbeth/Mary Worth and Candide/Ziggy (a particularly inspired pairing).

The longer pieces have less immediate punch, and may rely much more strongly on the reader’s knowledge of the intricacies of the original classic’s plots; “The Crypt of Bronte” (Wuthering Heights-as-EC Comics) and “Hester’s Little Pearl” (The Scarlet Letter-as-Little Lulu) are each more than a dozen pages, and the former, in particular, drags in spots. (This, though, may be more of an indication that your reviewer doesn’t have a strong appreciation for Emily Bronte or EC.)

However, the third of the long pieces – the Batman-meets-Raskolnikov “Dostoevsky Comics” – I did find to be stronger and more energetic that the first two, which again may be because of my personal taste and knowledge. Sikoryak finishes up this slim book – it’s just 66 pages – with some more excellent short tales, including [[[Dorian Gray]]] as [[[Little Nemo]]] and “[[[The Metamorphosis]]]” as[[[ Peanuts]]].

Masterpiece Comics does aim at a somewhat rarefied audience, since the fans of Batman and Garfield are not necessarily going to be familiar with Dostoevsky and Marlowe. But, for those who do get the references on both sides, this well-designed and handsome book is both welcome and hilarious.