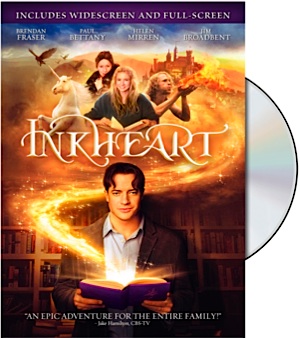 After its success with [[[The Lord of the Rings]]], New Line wisely began scouring the bookshelves for other properties that could feed the appetite of a growing public to whom fantasy was no longer reserved for the geeks.  They snatched up several including Cornelia Funke’s German novel, which first saw print in fall 2003.  Inkheart

is a well-received novel, first in a trilogy naturally, about a family whose father was a “silvertongue”, who by reading aloud could bring the written word to life.

New Line grabbed the rights and shot the film in fairly quick order but the hoped for December 2007 release got delayed and then the Writers’ Strike forced them to juggle their schedule and then Warner Bros. gobbled up New Line and before you knew it, [[[Inkheart]]] was quietly released in January. And here we are in June with an equally quiet video release, coming Tuesday.

Inkheart was the name of a fantasy book that Mortimer (Brendan Fraser) read one night to his young daughter Meggie. When its characters came to life, his life was changed as his loving wife Resa (Sienna Guillory) vanished at the same time, trapped in the book. Mo never read aloud again and began a quest for a new copy of the book to free his wife. However, Capricorn (Andy Serkis), leader of the foul beings that came through, fled and established a castle in Italy and built up a powerbase, not at all desiring to go home. In fact, the only one who desired a return to print was Dustfinger (Paul Bettany), a fire performer who missed his wife.  For years, Mo sought the rare book, only to have copies vanish from under him as Capricorn also sought the out-of-print tome to destroy.

Now, Meggie (Eliza Bennett) was 12 and Mo finally found a new copy at the same time as Capricorn’s goons. Meggie finally begins to learn the secret her father had been harboring and gets caught up in Capricorn’s machinations to seal his place on Earth.

The movie has tremendous potential for wonderment in addition to a rich relationship between father and daughter. There’s time for moody tension and opportunity for nice character bits and humor. Instead, we get a mashed up film where none of that potential is achieved. There’s little subtlety to the performances, save Bettany, and the story begs for better treatment. Instead, David Lindsay-Abaire’s screenplay misses every opportunity to rise up and be wonderful (and what’s scary for ComicMix readers is that he’s attached to [[[Spider-Man 4]]]). Director Iain Softley robs the film of its magic, delivering everything with the same tone and feel rather than using a full palette.

The Aunt, played by Helen Mirren who must have grandchildren, really has nothing to do and is more of an annoyance than participant. Jim Broadbent is wasted as the novel’s author although he has a sympathetic and briefly sketched character arc.

Watching it, I kept wondering why Mo didn’t just read a [[[Superman]]] comic or a strategically chosen book and bring with him an army to stop Capricorn’s evil plot? Never addressed. And then we get the climax which had the look and feel of the final scenes from [[[Raiders of the Lost Ark]]], spoiling a chance to redeem the film.

To see what the film could have been the one and only extra on the DVD is a lovely bit with Bennett reading from a chapter of the novel, a scene not included in the film.