Review: The Taking of Pelham One Two Three 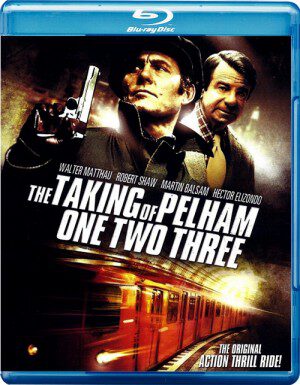 One of the joys of the current Blu-ray era is that studios have been delving into their libraries and restoring gems, releasing them with varying degrees of love and care. We’ve recently seen, for example, the arrival of musical greats West Side Story and My Fair Lady. But studios have also been working to bring back the really good films that have been somewhat forgotten. They may not get the deluxe restoration or bonus features, but it’s nice to have clean prints and high definition editions so we can still enjoy them at home. I’m reminded of all this because out now is the original The Taking of Pelham One Two Three. This film, starring Walter Matthau and Robert Shaw, is based on a novel and was one of my favorite films of the 1970s. I was interested to see the Tony Scott remake a few years back but longed for the original which I finally tracked down. I watched it and felt incredibly nostalgic.

The film is far from perfect, but is an excellent time capsule of New York City in the mid-1970s, as crime was rampant, the city was dirty, and the public servants were rumpled and dogged. Four men with colorful pseudonyms — Mr. Green (Martin Balsam); Mr. Grey (Hector Elizondo); Mr. Brown (Earl Hindman); and Mr. Blue (Robert Shaw) — took possession of the subway designated Pelham One Two Three. They make demands of cash, threatening the passengers’ lives. On the other end is the MTA’s Lt. Zach Garber (Matthau), trying to determine how they could pull off the hijacking with such precision. It had to be an inside job and the hunt is on. Amusingly, a delegation from Japan is visiting the MTA control center just as all hell breaks loose and provides some stereotypical comic relief with a killer punchline. The film is filled with a wondefrul supporting cast, from Kenneth McMillan to Jerry Stiller.

A cash-strapped New York has one hour to assemble a million dollars cash and deliver it to the subway. Some of the most knowing sequences are set at the home of the mayor (Lee Wallace, who also was Gotham City’s Mayor in Batman), surrounding by his chief aide (Tony Roberts) and his wife (Doris Roberts).

As directed by Star Trek veteran Joseph Sargent, the film is tense and atmospheric, restrained in the action but with enough humor to make it feel real.

The transfer is solid without being perfect, the original’s graininess and subtle colors are nicely preserved. 20th Century-Fox Home Entertainment has included the original trailer as the sole extra.

Seeing this film in comparison with the 2009 remake is a fasciating example of how our moviemaking has changed, along with audience expectations. Now we get a lot of crashes and cursing and time devoted to bringing the characters to an approximation of three-dimensions. Still, the original remains superior for the tension it creatres and the cold, calculating Shaw matching wits with Matthau, a far more interesting matchup than Denzel Washington and John Travolta.