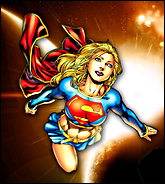 I had the weirdest dream last night. Like all – or most dreams – it was a jumbled mix. And some of the details are getting lost as the day goes on. But I do remember that I was in the midst of writing three books for DC, one of which was specifically for Karen Berger, although I couldn’t really classify the stories as strictly Vertigo. They were more along the lines of Elseworlds, or Marvel’s Ultimate titles.

All the books were graphic novels and very adult, but the only one I remember clearly now is the one about Supergirl, the original Supergirl, Kara Zor-El, and it was getting the full DC PR treatment – in fact, I think it was Martha Thomases, my friend and fellow columnist here at ComixMix, who was handling the publicity. Karen was very excited about it, and I knew I was writing at the tope of my game. Alex Ross was doing the art, painting it ala Marvels or Kingdom Come. Or if it wasn’t Alex, it was someone equally talented.

But my Kara wasn’t the sweet, prepubescent young lady who was Superman’s secret weapon. This Kara was one tough broad, and street-smart. In my dream she had escaped Krypton’s destruction by running away from home, hitching a ride on a space-trucker’s semi, who subsequently tried to rape her in his cab. This happened while the semi was passing by Earth’s solar system, so it turns out that, because of the influence of Earth’s yellow sun, Kara is the wrong babe for the space-trucker to mess with.

The (super) struggle causes the semi to crash on Earth. Kara is the “last man standing” after the crash, which is investigated, not by Superman, but by Wonder Woman and two other superwomen. (But even while I’m dreaming I’m feeling pissed off because I can’t identify the two other women clearly, though both could fly and were very powerful and I think one of them was a lot like Kelly Sue DeConnick’s Captain Marvel – or maybe it was Carol Danvers, I don’t remember.)

Anyway, Wonder Woman wants to take Kara to Themiscrya, but Kara refuses to go, telling Wonder Woman “I ain’t no dyke, and I ain’t going to an island full of dykes.” (Don’t ask me how she speaks English and knows nasty, sexist slang – dreams don’t work like that.) The “sorta” Captain Marvel/Carol Danvers pulls a full nelson on Kara, but Kara breaks her grip and the two fight. While they are fighting Wonder Woman uses her “lariat of truth” to rope Kara to try and calm her and make her tell the truth, i.e., who she is, how she got there, but Kara uses heat vision (inadvertently, the girl is still discovering her powers) and burns the rope, breaking free and flying off.

So this is the first chapter of the graphic novel, and like I said, Karen is very excited and happy with my work; me, too, plus I’m making so much money that I can quit nursing and become a full-time writer. Which is good because working full-time as a nurse would certainly interfere with my ability to make deadlines if I’m writing three graphic novels at the same time. And Joseph Campbell said to “follow your bliss” if you truly want to be happy, and nursing isn’t my bliss (though I’m good at it) and writing comics on a full-time basis is and I’m very happy, very satisfied, with my life.

But then I read in the New York Times and The Comic Buyer’s Guide that there has been a huge upheaval at DC, and it has been sold off to some conglomerate that is even bigger than Time-Warner – or maybe it’s that Time-Warner decides to dump DC because the company’s movies, even with Man Of Steel making gazillions, pretty much suck – or it had something to do with the CBS vs. Time-Warner Cable war…

So all my books are on hold, including the Supergirl graphic novel. It’s not going to see print.

I’m suddenly not enjoying this dream, and I want to wake up.

Then I get a call from “somebody” that there is a big meeting regarding the reorganizing at DC after the sale and I’m invited. Only it’s the same day as a wedding I have to go to – or not. I remember that in the dream I dress up to go this meeting, waaaaay over-dress in an incredibly beautiful art deco-y type of gown – think Jean Harlow in Dinner At Eight – in a satiny deep, deep purple, and this stunning cloche with a peacock feather curling down and around my chin, and in the dream I guess I’m trying to justify why I’m dressed so formally because I’m thinking that I will catch a cab and get to the wedding/affair after the meeting.

But you know dreams. Even though I’m sleeping I know that something isn’t right.

So I get to the meeting and there are people there whom I know but can’t recognize. But everyone is very glad to see me. We are in this very corporate, and yet very classy, glass-enclosed boardroom. The ceiling lights are recessed and there are candles burning on glass coffee tables and we are lounging in big, slate-blue love seats. Everyone looks absolutely terrific, though I am the only one in a gown, everyone else is wearing very expensive, designer suits by the likes of Hugo Boss and Chanel and Stella McCartney and Dolce and Gabanna.

The new owners of DC (a few men and women) hand out prospectuses and folios that contain the new organization chart for the company. According to the chart I am going to be an executive editor. The “new Karen.”

I want to be a writer.

Nobody hears me, or chooses not to answer.

Now the new owners pass out envelopes. We all open them. Inside are contracts, or “letters of agreement.” My letter tells me who will be in my “stable,” including editors, assistant editors, writers, and artists. I want to know if I have to use these people if I don’t want to; again, nobody hears me.

Boy, do I want to wake up now.

I turn to the woman sitting next to me. She kind of looks like Shelly Bond, but I’ve only met Shelly once or twice, so I can’t be sure, and, anyway, it’s not her.

“No, it’s not,” I say. “Not for the responsibilities they want me to have. And anyway, I make more than that as a nurse.”

Then I hear my name mentioned, and the new owners are telling me that they are pulling my Supergirl book. It’s dead in the water.

Everyone else is busy signing his or her contracts.

They are signing their lives away.

They’re all just happy to have jobs in the comics industry.

I get up and walk out.

…even though it’s the worst way to end a story…