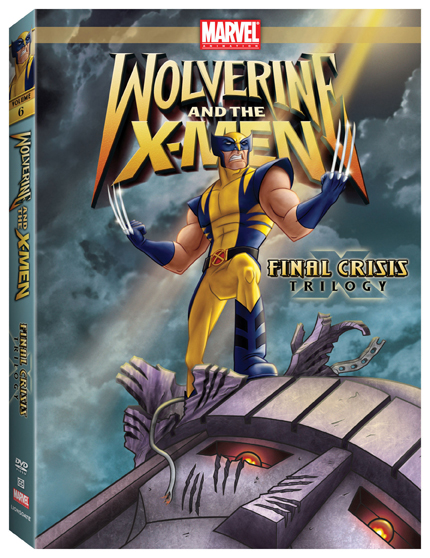 [[[Wolverine]]] and [[[the X-Men]]], the fourth animated interpretation of the Marvel mutants, was the most radical and also the most short-lived. Lasting a mere 26 episodes, the Nicktoons series apparently wasn’t popular enough with ratings and merchandise to merit financing a second season. Marvel Animation clearly thought they had a hit on their hands and images from the developing second season were released. Additionally, the final scene was a teaser for the second season. But, alas, this was not to be.

Lionsgate, today, is releasing the sixth and final volume of the show, probably three volumes too many, but at least they are affordably priced (and at Comic-Con International, a complete series set was announced).  The single-disc contains just the final three episodes, which aired under the name “Foresight” but is being released under the more commercial [[[Final Crisis]]]. Having previously reviewed the last two volumes, Fate of the Future and Revelation, I was curious to see how they wrapped things up.

All the threads and main players throughout the season turn up and have their moment as the conflicting timelines and threads are woven together into a massive climax. We have Magneto and the inhabitants of Genosha readying for an all-out assault while he has manipulated players so he thinks he controls both sides of the conflict between man and mutant. What he has not counted on was the Hellfire Club and their plans to unleash and control the Phoenix force.

In fact, the role of the Phoenix in this interpretation is the most
radical departure from the comics as is the Hellfire Club’s reason for
existing. As a result, one of the more visually impressive moments of
this series occurs. And as with the comic books, the action never
overwhelms all the emotions at play, especially the romantic triangle
between Cyclops, Jean Grey, and Emma Frost.

Another alteration,
and the same fault employed by the feature films, is that Charles Xavier
is offstage all too often, his keen intellect taken off the playing
field. In this case, he’s in a modern day coma but a more pivotal player
in a bleak alternate future. Steve Gordon, Greg Johnson, Craig Kyle,
Joshua Fine, Nick Filippi, and Boyd Kirkland all contribute to the
trilogy, which aired November 29, 2009, and as a result, it also feels
like there’s a kitchen sink factor at play, with too many players on all
sides. This brings on players for their brief moment then gone and
often they’re both identified so one has to guess what’s going on. On
top of it all, the Stepford Cuckoos get introduced for the final arc but
it’s organic and integral.

Interestingly, for a show built
around Wolverine, he has little to do with the actual climactic events,
keeping things focused on Jean, Scott and Emma.

Had the final
teaser for the aborted second season never aired, the entire series
would have felt more like a satisfying, sprawling novel with a
beginning, a middle and definite end.

The show was uneven with adequate animation and terrible voice casting but fans of the comics will find much to like here.