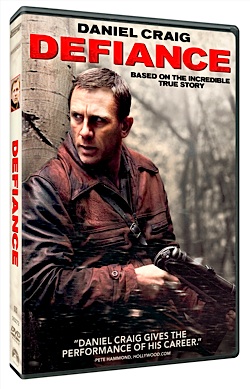 We here at ComicMix write about heroes all the time. They tend to be muscle-bound, wear spandex and appear in the fevered imaginations of writers and artists. In the real world, people are given the title hero when they are bystanders, victims, or their feats are fairly ordinary. As a result, the term has been somewhat watered down and in need of rehabilitation.

The process could have begun last winter when two movies about World War II were released, featuring very different kinds of heroes. Neither Valkyrie nor Defiance

made a lot of noise at the box office nor did they ignite a debate over the nature of heroism in times of war. And that’s a shame, really, since in the former, Colonel Claus von Stauffenberg, was a patriot, a German who saw Hitler for the devil he was and risked everything to take him down, paying for it with his life.

[[[Defiance]]] visited a different side of the war, that of the victims, the Jews who rose above their adversity and defied by Nazis by surviving, led by three amazing brothers. Bother films suffered because by the time they were made and released, the country’s mood was too dour to pay attention to serious dramas or care about dated acts of heroism.

Today, though, Defiance comes out on disc and worth a look. Again, an incredible story from the war has been uncovered and brought to the screen. Edward Zwick first began writing this story in 1999, based on Nechama Tec’s [[[Defiance: The Bielski Partisans]]], and finally managed to shoot the story in 2007, starring Daniel Craig, Liev Schreiber, and Jamie Bell as the brothers Bielski. They were your lower class workers in Belarus when the Germans began killing the Jews. To survive, they fled into the forest where they played as boys. Fairly quickly, the scattered refugees in the forest coalesced around these three, who took on the responsibility of caring for them, and more importantly, organizing them to survive the impending winter.

While the film focused entirely on that first formative year, it should be noted they survived in the forest for three years, with over 1200 walking to freedom when the war ended.  The brothers had their differences, with Tuvia (Craig) and Zus (Schreiber) arguing over what to do and Zus eventually leaving to serve with the Russians for a time. But we see how these “street smart” people came to lead a motley crew of intellectuals, peasants, upper class, and just plain folk who needed guidance. We watched as news reached them of now-dead loved ones, including Tuvia and Zus’ wives. In time, people took Forest Wives and Husbands, seeking comfort where they could.

Zwick is no stranger to historical tales ([[[Glory]]]), and brings the same attention to detail and character here. Not only do the brothers evolve over the course of the story, but we watch all the bit players adapt, change, and grow; filling the screen with a sense of life that Bryan Singer’s Valkyrie was devoid of.  The movie is not entirely faithful to history as combat sequences including the climax were added for “Hollywood” concerns but their struggles, especially the harsh winter, ring true.

The film is backed by several special features. The 30 minute Making Of shows the attention to the little things extended to the weapons, costumes, and makeup – all well displayed. Zwick took portraits of some of those who survived and we’re treated to a nice black and white gallery. Children of the Otriad: The Families Speak, though, is the highlight, as the children and grandchildren of the Bielskis talk of their fathers and what they were like after the war. Whereas Asael (Bell) died soon after these events, the two remaining brothers survived and worked side-by-side in the trucking industry here in America for 30 years. We see them as older men in bar mitzvah footage, and it’s hard to see these elders as war heroes but there they were and while Zus still had a spark of life, Tuvia carried a gravity about him. Lilka (Alexa Davalos), the woman who came to marry Tuvia after meeting in the forest, never seems happy in the footage. Her children spoke of her inability to fully enjoy anything, another price exacted by World War II.