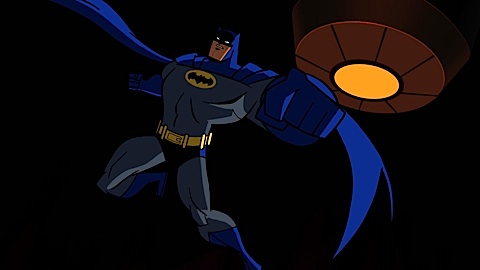 If you are insistent that [[[Batman]]] always be portrayed as a dark, obsessive vigilante surrounded by nothing but psychopaths, then maybe the new cartoon series [[[Batman: The Brave and the Bold]]] isn’t your cup of tea. But I challenge you to watch an episode and tell me it doesn’t make you grin from ear to ear.

The new cartoon series has been loads of fun with over-the-top adventures that completely embrace their own absurdity. For those of us tired of never-ending angst, this series has been a great cure-all. And in the tradition of the comic book series of the same name, the show is based around team-ups. Each episode, the [[[Dark Knigh]]]t works alongside folks such as the [[[Green Arrow]]], Aquaman, Elongated Man, Plastic Man, the Atom (Dr.Choi), Red Tornado and the Blue Beetle (both Ted Kord AND Jamie Reyes).

This friday, 8:00 PM on Cartoon Newtork, fans will see part 1 of the two-part season finale. We here at ComicMix were given an advanced peek at this hour-long tale. Wanna see? 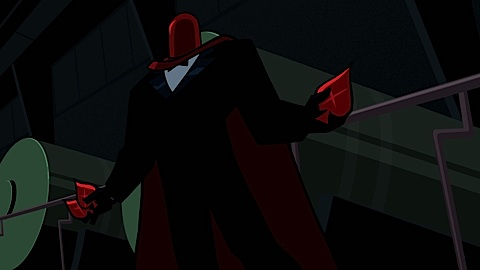 The first part opens up on the character of the Red Hood (and if that doesn’t make you Batman comic fans sit up straight, there is something wrong with you). But this isn’t a flashback.

No, this is an alternate reality where the Red Hood is one of the few heroes who try to defend people from the sinister Injustice Syndicate, a group of villains led by Batman’s parallel world twin “Owlman.” The Red Hood has found that he’s running low on allies, so he uses experimental technology to open a portal to a world where Owlman became a hero with a bat fixation.

Too bad Owlman decides to explore Batman’s world for himself.

What follows is a high-flying adventure that has Owlman screwing around on Batman’s Earth and Batman finding himself on Owlman’s Earth, a strange world where he has few allies and the villains look just like his friends. If you haven’t seen any episodes of this series before, don’t worry. Everyone is introduced and their role quickly explained. The action is fun, the banter is hilarious and there are some genuinely surprising plot twists.

And if you’re a continuity/history freak like me, you will find yourself laughing at all the references to Silver Age and Elseworlds stories. On top of the Red Hood’s animated debut (and it’s about time!), you get to see a character wearing the original Golden Age Batman costume and an appearance from a character called the Blue Bowman. In this story, the Blue Bowman is a parallel universe version of [[[Green Arrow]]]. But us major geeks know that in the comics the “Blue Bowman” was an identity assumed by the villain Signalman when he decided to take on the emerald archer. That kind of attention to continuity makes this series a tremendous joy. 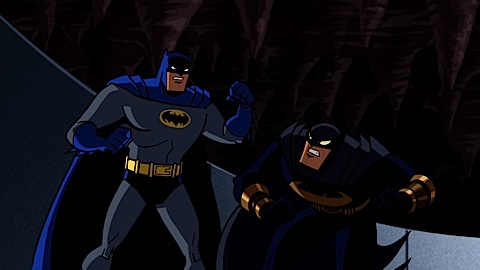 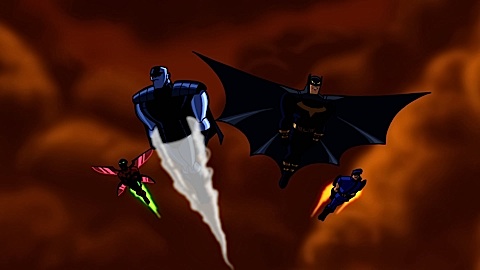 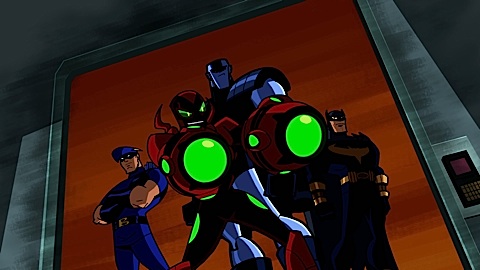 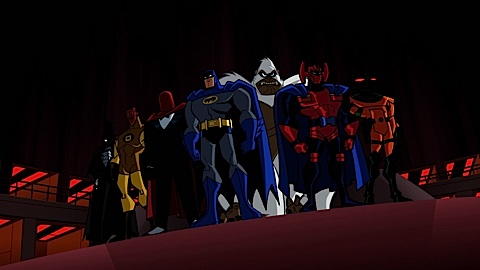 Again, if you think [[[Batman]]] doesn’t work unless he’s working in a grim environment or you just prefer your heroes to have tortured monologues about the difficulty of their lives, maybe this isn’t for you. But that’s your loss because this two-part finale is just plain fun. My only complaint is that I wish Jeff Bennet had made more of a vocal distinction between the two characters he played. But that’s just my own preference, it doesn’t lessen the story at all.

So tune in to Cartoon Network on Friday at 8:00 PM and join in the fun!

Alan “Sizzler” Kistler enjoyed identifying all the different continuity references of this season finale way too much. He has been recognized by mainstream media outlets such as the History Channel and New York Daily News as a comic book/pop culture historian, and can be seen in the Adventures of Aquaman and Justice League: New Frontier DVDs. His personal website can be found at: http://KistlerUniverse.com. One of these days he’d love to write for DC, Marvel or Doctor Who.