Marc Alan Fishman: What DC Could Learn from Logan 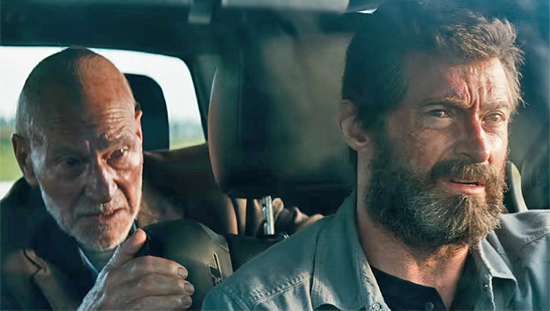 Having finally caught and absorbed James Mangold’s Logan, the finale to the OG X-films, I find myself hoping that the execs behind the soon-to-be-released Wonder Woman and Justice League movies were taking notes. A caveat: I’m going to attempt to keep my lens wide this week. While I don’t believe I’ll be spoiling anything more than people on your Facebook feed have blathered about, be nonetheless forewarned.

Before I get into my listicle (they’re what make articles click-baity, don’t-cha-know), let me quickly pontificate. Logan was one of the most powerful superhero films I’ve ever seen. Perhaps second only to The Dark Knight. It was a straight-forward small-scale road picture that kept a handle on a single-thread story, presented as an homage to the westerns it evoked throughout the picture. In spite of a heavy-handed two-hour run-time, the film itself moves at a steady pace. The performances are top-notch, with Patrick Stewart and Hugh Jackman taking astounding leaps above their initial performances of Charles Xavier and Wolverine circa 2000. Sweet Rao I feel old just typing that. But I digress. On with the listercizing!

The first thing DC should take note on… and perhaps highlight, circle, underline and install neon lights around… is that it’s perfectly acceptable to be maudlin if it’s earned. X-Men, X2, and to a much-much-much-much lesser extent any of the other X-films did much to pile on the action and gravitas towards the mutant life en masse. But Logan abstains from needless retreading. Instead, it delivers us heroes who are hurt inside and out. It gives them needs, wants, and desires that don’t coincide with some greater plot or McGuffin. And when a McGuffin lands in their lap, they pleasantly drape it in subtext (Charles Xavier, through his delusional state, would seek to mentally communicate with any over living mutants, wouldn’t he?) that earns the gravitas the film requires. And when a character screams to the heavens in a shrill cry of anger and sadness, it comes by way of two-hours of earned malaise and not because it looks cool.

During a lull between brutal set pieces, Professor X waxes poetic about the final days of his former academy. He doesn’t speak in pure exposition. He drifts in and out, dancing around nuanced and painful memories, and ultimately evokes the feeling of tragedy and regret deeply rooted in his psyche. We never hear the full details of what occurs. We never see some spiffy CG recreation. And we never need to.

In addition to Charles’ admission of guilt and shame and the slow reveal of X-23’s backstory, Logan elicits the show-don’t-tell ethos that DC needs to heed. While yes, we get the obligatory backstory tacked to her early on, it’s delivered without hanging a lampshade on it time-and-again. Laura is feral and untrusting. She’s lethal and raw. While we see her drop her guard eventually, it comes over the course of many scenes and instances where Dafne Keen shows us how powerful a performer she is. Logan never once feels the need to montage our way toward understanding a new norm.

The biggest issues I’ve had with Batman v. Superman and Suicide Squad came solely in their fetish for destruction. Logan certainly was built for violence. But when it occurs, it’s not only earned by the stakes in the story, it comes layered with emotional and physical fallout. As Logan and others are forced to fight a youthful Wolverine clone (my one spoilery thing, I apologize…), suddenly fighting a savage killer with a healing factor feels like a true threat. It also stands to note that even in the climax of the film — with multiple combatants, gunfire, and viscera — there’s no death for the sake of spectacle. War is waged for hope, humanity, and vengeance. All that, and there’s nary a single beam-being-blasted-towards-the-sky. Natch.

If nothing else could be counted on by DC after seeing Logan, it should be the safe admission that sometimes it’s OK to tee-up a predictable story. There’s nary a single twist to the picture if you pay clear attention. But, due to the patience of director Mangold, we get a film that never needed to rely on ham-fisted trickery to earn the 92% fresh rating on Rotten Tomatoes. The potency lies in the characterizations and believable escalation of antagonism. Villainy in Logan is no less super-villainous that Lex Luthor creating Doomsday, or Darkseid declaring war on Earth. But it’s the reactions of our heroes that carry us through to the end credits. Jokes occur naturally and not at the behest of breaking a tense and necessary silent moment for the sake of relieving the stress on the audience. Mangold lets the story unfold through deliberate character-driven motivations. We never see the puppet-strings of action-figure-merchandisers creating moments for future marketing. Honesty and artistry over bottom-dollar-profits. And because of it, the fans have carried a hard R-rated film to over 500 million dollars in ticket sales.

I know Justice League and Wonder Woman are being built to pitch out to a larger PG-13 audience. But the sincere hope remains that DC paid attention. Logan was amazing not because it used the word fuck a few hundred times, but because the story delivered earned every last fuck delivered.