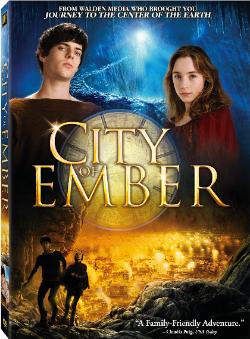 Other than the [[[Narnia]]] movies, and more recently Inkheart, there really haven’t been many good fantasy films aimed at families. That’s why 20th Century-Fox’s [[[City of Ember]]] proved to be such a major disappointment.

The film opened last fall after an extensive marketing campaign aimed not at the families but at the fans who might have kids. The mainstream marketing was lackluster and may have resulted in the film earning just under $8 million at the box office and vanishing without a trace.  Which also goes to explain the plain vanilla DVD release, now on sale.

Based on the book series by Jeanne Duprau, the film quickly introduces us to the concept of the underground city of Ember, constructed and populated in the case of global calamity. The elders who conceived of this audacious plan prepared a container with instructions on how to exit the city and set a timer to unlock the box some 200 years hence. The box became a sacred relic, passed on from mayor to mayor until the seventh mayor unexpectedly died and the box was lost.  The movie opens more than 200 years later, well after the city’s warranty ran out.

The film focuses almost exclusively on the youngest generation, led by Lina Mayfleet (Saoirse Ronan) and Doon Harrow (Harry Treadaway), and their discovery of the box, its contents, and the race to find the exit before the massive power generator shorts out once and for all.  Standing in their way is the inept and possibly corrupt current mayor, played with dead-eyed nonchalance by Bill Murray.

The movie entirely fails to enter by being all surface and no substance.  We never understand how the society functions, what the hierarchies are, and why all the adults are idiots or sheep.  It appears out heroes are the only two in the entire city, population unknown, who can think for themselves.  And of course they get that genetically, since their fathers had both tried to escape the city in the past, costing Lina’s father his life.  Doon’s dad, in a wasted performance by Tim Robbins, is defeated and has given up. In fact, the film suffers from poor performances by actors ill-used including Robbins and more notably, Martin Landau.

There are countless gaps in story logic right up until the conclusion. One example is when the kids activate a mechanism that begins launching lifeboats, only to see them crushed under a waterwheel.  Quite some time passes by before our heroes get in one of these boats but there’s no sense of how many have been crushed in the meantime, costing who knows how many people the chance to leave the city for the surface.

It’s entirely possible to make entertaining children’s fantasy fare as witnessed by the more successful adaptations of Roald Dahl and J.K. Rowling.  This movie, directed by Gil Kenan, fails on every level with the exception of nice set design and a winning performance by Ronan.

The bare-bones DVD looks and sounds fine.  There are some related trailers for other family films but not a single extra related to this misfire. Even Fox has lost faith in the franchise which is a shame since the award-winning book series has endured.