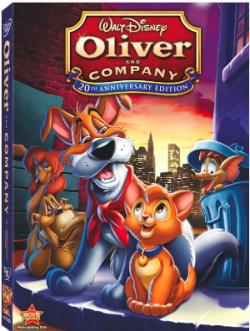 Disney’s fortunes with their animated fare had fallen fairly far by the 1980s.  The sheer expense of hand animation made the films difficult to mount and then changing audience tastes always seem to stay a step or two ahead of Disney.  In the past, Disney films were the tastemakers, introducing pop songs and icons but those days more or less ended in 1968 with the [[[Jungle Book]]].

The arrival of [[[Oliver and Company]]] in 1988 signaled a step in the right direction.  The studio experimented tepidly with computer animation using the technology for backgrounds on [[[The Great Mouse Detective]]] just prior to this film.  Now, they used it for more backgrounds and actual character animation, allowing them to focus more on story, song, and characterization.

In keeping with Walt Disney’s habit, the film is based on a public domain tale, Charles Dickens’ [[[Oliver Twist]]], but totally reconfigured in contemporary terms.  The notion of an orphaned cat taken in by a pack of dogs has potential but the characters are all surface and charming, rather than edgy or anything other than charming. The lack of shading to any of the characters is disappointing, something that doomed the film. Notice you don’t see a lot of Oliver costumes at Disneyland.

Oliver is one of the first in the Disney canon to go out of its way to go for celebrity voices and Bette Midler, Cheech Marin, and Billy Joel head the cast.  All do admirable jobs but the material is limited. The mix of songwriters adds some nice variety and you see some early work from Alan Mencken, a foreshadowing of better times ahead.

In fact, this is the film that essentially transitioned Disney from being an also ran to being king once more since this taught them everything they needed to know to begin a new era of supremacy with the following year’s [[[Little Mermaid]]].

The 20th anniversary disc, released Tuesday, offers very little in the way of anything new from the previous editions. The picture looks fine, the sound is fine.

Extras are taken from the previous disc and include a five minute, particularly uninformative making of featurette (which could have been cleaned up for this edition). Then there’s The History of Animals in Disney Films, which is a great topic but given short shrift in just two minutes.

There are the trailers and some sketchbook material which is nice to look at.

New to the disc are a few activities and a game, Oliver’s Big City Challenge.

Over all, the film is pleasant enough and a good addition for families but it pales in comparison with the features that followed.