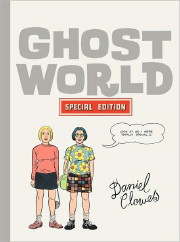 Ten years after the first collection of [[[Ghost World]]] and seven after the movie version of the same story (and, not coincidentally, the screenplay book), Dan Clowes’s most famous and best-known story has gotten the big fat hardcover treatment – and I’m sure that the fact that his story of suburban ennui and aimlessness follows dozens of stories of spandex-clad punching bags into basically the same format and sales channel is an irony not lost on Clowes. (Though I should point out that this big fancy hardcover is not nearly as expensive and laded with gewgaws as most of those “absolute” and “essential” and “ultimate” books – all those books that name themselves, and lavish on themselves production designs, reminiscent of high end sex toys; shiny and sleek and oversized and, all too clichéd often, in jet-black. Clowes’s book has reasonable proportions, and a price quite reasonable for an art book of its size.)

This “Special Edition” collects the graphic novel [[[Ghost World]]], by Clowes, and the screenplay, by Clowes and Terry Zwigoff. It also adds in a forty-eight-page section of miscellany – box art from odd ancillary products, covers from old [[[Eightball]]] issues when Ghost World was being serialized, foreign covers, miscellaneous art related to the movie, and a few sketches and pages of original art. Up front is a new introduction by Clowes, and a two-page story that may, or may not, show a glimpse of Enid and Rebecca’s lives now. Those are pleasant, but the real core of Ghost World is the story, and this book gives both versions of it equal weight.

I won’t review the stories themselves; if you haven’t read Ghost World, or seen the movie, by now, you should go do so. (Assuming that you’re not allergic to the angst of two teenage girls who don’t know what they want, and are still working out what they don’t want. But if you do enjoy stories that are primarily about characters and their desires, this is one of the better ones in comics form.) The two iterations of the story here are different and yet the same; Enid and Rebecca are clearly themselves in both versions, though what they do turns out very differently. As usual, a character in a written story can behave much worse than an actor can and still be likable to the audience – what the written Enid did and said wouldn’t have worked on screen. Something similar can be said for Clowes’s grotesques – Bob Skeetes is an amusing oddball on the page, but he did need to turn into something more like Seymour on screen to avoid being purely a caricature and butt of jokes.

The production values of Ghost World: Special Edition are excellent, with nice firm boards and a crisp white paper stock. I do have to cock an eyebrow at the choice not to reset the two included books – Ghost World, the graphic novel, appears as the current Fantagraphics trade paperback edition (down to cardstock covers and an incorrect indication that this is the “fourteenth softcover edition” on the copyright page) dropped right into the larger hardcover, as does the screenplay book later on. The other materials surround the previously-existing books without subsuming them; they remain completely themselves – in page numbers, at least. That’s a quibble; this is a fine edition of excellent material, and I hope it’s finding its way into some of the more forward-thinking libraries as well as individual homes.