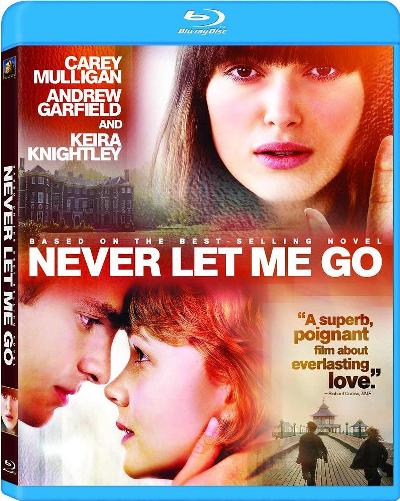 There are few topics more interesting to explore through fiction than the human soul. Does everyone have one? Where do they come from and if you believe in reincarnation, how do you explain where souls for the growing world population come from? Do clones have souls?

The latter is the driving thread in Kazuo Ishiguro’s 2005 novel [[[Never Let me Go]]], faithfully reproduced on the screen in the 2010 film. The science fiction tale diverges from reality by the supposition that cloning was achieved in the early 1950s and by the 1970s, clone farms disguised as orphanages existed to raise donors. After three or four such donations, the clones’ lives “conclude” and that’s that.

Directed by Mark Romanek from Alex Garland’s somber screenplay, the film looks unlike the expected science fiction tale. Instead, in a color-drained palette, we focus on the lives of three such clones: Kathy (Carey Mulligan), Ruth (Keira Knightley) and Tommy (Andrew Garfield). The entire first act shows them as children (Isobel Meikle-Small, Ella Purnell, and Charlie Rowe) at the cusp of adolescence, living and learning at Hailsham, a slightly rundown, sober establishment where the truth is obscured from those living there. When they reach 18, the three friends and rivals leave the school for the Cottages where they engage with similar folk from other homes. By now, Ruth has edged out Kathy for Tommy’s affections even though it remains clear she is not the one for him.

In subtle ways, Garland shows how sheltered and unprepared for a “normal” life these clones are. When they engage with people from the real world, they’re shy and awkward, but he fails to give us any sense of what these people do until they are summoned for their donations. Instead, the story focuses on the notion of a “deferral” for those truly in love. It’s a myth to the Hailsham residents but it becomes something they can’t forget.

The story skips through the years so the final act picks up with the leads in their mid-20s as Ruth rapidly deteriorates after just two donations while Tommy seems stronger than ever. Kathy has become a carer, someone to look after those who donate and is content with her solitary life until she reconnects with Ruth.

The film is coming out Tuesday from 20th Century-Fox Home Entertainment and is worth a look. Romanek gets terrific performances from his young and adult cast members. During the 30-minute making of featurette, we learn that he wisely had his adult and kid casts work together so the audience felt these were the same characters. The younger performers do a marvelous job getting us interested while the adults give haunting performances.

The entire notion of the soul is understated throughout the film until one of the final scenes and one wishes it was explored more deeply. Similarly, the film neglects to give us a sense of what the world is like now that people live longer thanks to the ready supply of vital organs. Is there a prejudice or even comprehension of who and what these clones are? It’s a bleak story, slowly told, that makes you want to learn more which can be a good sign for a book, less so for a film.

The DVD comes with a gallery of stills Romanek shot during production along with a detailed look at the artwork Tommy produced during his life, which furthers the story. Overall, the movie explores some new territory with mixed results but on screen it has a captivating look and feel worth sampling.