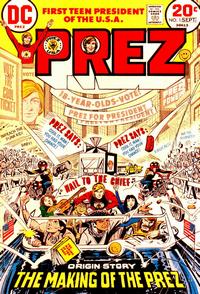 We’ve had a lot of US Presidents show up in the comics, Jossip and the Chicago Tribune both hit on the major ones– Nixon in Watchmen, Bill Clinton speaking at Superman’s funeral, Reagan in The Dark Knight Returns, JFK impersonating Clark Kent. But there are many more that stick in t here are a few truly fictional US Presidents from the comics:

1. President Ken WInd — not wind like a watch, but wind as in freedom. A dead ringer for Dan Quayle and a tool of the Beast, he was set up to become President so he could start a nucelar war. He was stopped by Elektra and a goddammed agent of SHIELD. (Elektra: Assassin)

3. President Prez Rickard. The first teenaged president of the United States, and the only one on this list to have his own series, this creation of Joe Simon made things run on time. Later written by Ed Brubaker, Neil Gaiman, and Frank Miller– he does that a lot, doesn’t he?

4. President Gary Callahan, a.k.a. "The Smiler". A rictus grin in a suit, he hates everyone and only wants to be President in order to control and oppress people, and has no problems killing anyone whose death will help him gain or keep power, or even get a rise in the polls– up to and including his own wife and children. The sworn enemy of Spider Jerusalem. (Transmetropolitan)

5. President Melanie Henderson. Okay, that was the name of the actress playing the President in the Spidey Super Stories short, "Spidey vs. the Funny Bunny", where a mischievous woman dressing in a rabbit costume and damaging Easter baskets by sitting on them. Spidey eventually foils the villain’s plans to disrupt the annual White House Easter Egg roll. Some sources indicate that Melanie may have been the first African American actress to portray an American president on television.