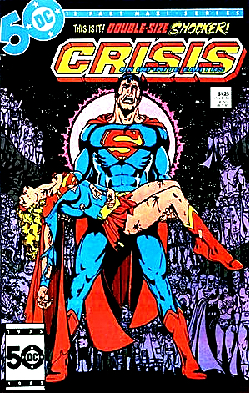 Superman: C’mon, Kara…don’t give up. You’ll make it. Pl…please…please stay with us.

Supergirl: I can’t. B…But’s it’s okay…I knew what I was doing…I wanted…wanted you to be safe. You mean so much to me…so much to the world.

Superman: You succeeded in destroying the machines.

I watched the teaser. And though I generally don’t watch them because of their usually really bad quality, the bootleg version of the pilot episode mysteriously showed up in my e-mail box the other day; by the time you read this I will not have been able to resist. You are my favorite super-heroine of all time.

How many times have I mentioned you, Maid of Might – one of your nicknames back in the day – on these pages in the last two – or is it three – years? The last time was just two week’s ago in Occam’s Razor.

And I felt old.

Fred and Edna Danvers didn’t adopt you, and you didn’t rescue them from certain death, blowing your secret identity, which of course your cousin agreed you absolutely had to do. And the people of Earth never celebrated and honored you when your cousin finally said that you were ready to graduate and step out on your own, so you never met the President and you were never honored at the United Nations.

Well, there is one good thing. You were never kidnapped by Lesla-Lar of the bottled Kryptonian city of Kandor and brainwashed into believing you were she, living her life as a respected scientist in a city in a bottle kept by your cousin in his Fortress of Solitude while she lived your life on Earth.

All that history, and more, wiped out of existence as if it never happened, never inspired the imagination of one little girl and, I bet, thousands, maybe millions, like her, who read comics and dreamed of things that never were but could be.

All that history to draw from, to borrow, to homage, to even reinterpret…all the things that could be….

…when you, Supergirl, make your first debut on network television this fall.

I don’t know whether to laugh and cheer…

…or to cry and mourn once again.