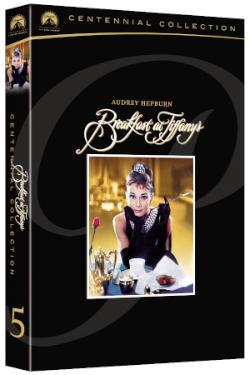 Paramount Home Video concludes their Audrey Hepburn review with the fifth entry in their Centennial Collection, the classic Breakfast At Tiffany’s

, on sale today.  It’s interesting that they’re celebrating a century but the first five releases are all from the same era, the 1950s and while this was released in 1961, still has that same look and feel.

The film has withstood the test of time very nicely given the loving touch of director Blake Edwards who oversaw this adaptation of Truman Capote’s novella and made it uniquely his own.  In the prose, Holly Golightly never sang “Moon River” nor did she really have a happy ending.  Characters differ between story and screenplay and by now, most people know Capote always envisioned Marilyn Monroe in the lead. He was crushed when Hepburn was cast.

While Monroe would have been good in many ways, this was all about style and elegance, the upper crust of Manhattan society and as a result, Hepburn was a better pick.

Making the movie was a challenge for Hepburn, playing the extroverted socialite escort (not a call girl) who ran away from her “hick” life and husband (an underrated Buddy Ebsen).  Instead, the social whirl of Manhattan at its finest was seductive and she wanted to live life to its fullest.  The pinnacle for her was Tiffany’s, the legendary jewelry store. Naïve in so many things, her actions are not always conscious ones and she pulls new tenant Paul Varjak (George Peppard) along in her wake. Her life is filled with fascinating people and annoying ones, such as the Japanese photographer, buffoonishly played by Mickey Rooney. The film is filled with terrific character actors including Martin Balsam but it’s also Peppard’s best role.  He is earnest and cool at the same time, working to craft a character, rather than easing his way through later roles as Banacek and Hannibal Smith.

Blake Edwards showed what he can do with comedy and subtle character interplay here, a visual style that became his signature for years to come, capped by [[[Victor/Victoria]]].  He’s accompanied by composer Henry Mancini who made his name with the score plus earning an Oscar for “Moon River”, which had lyrics from Johnny Mercer.  As we’re told at least twice on the extras, a Paramount exec felt the movie ran long and wanted to cut the song until Hepburn effectively said, “Over my dead body.”

The love story is a valentine to a time and place that no longer exists although the hopes and dreams of those escaping their homes for the City That Never Sleeps remain the same.

The film looks and sounds terrific as the restoration makes everything shine as intended.

On the second disc are a plethora of extras that are pleasant, albeit somewhat repetitive without offering much in the way of new or important information on the making of the film. All the featurettes from the 45th anniversary disc return along with a nice look at Mancini as a family man but his rich career is given short shrift while the “Making of a Classic” feels perfunctory.  Instead, many of the extras from the infamous cocktail party scene are reunited for a more subdued affair and their recollections are informative.  Edwards devoted eight shooting days to film the sequence and the attention to detail is fascinating. We also get another variation on Hepburn as a fashion icon and a nice history of Tiffany’s.  The Centennial extra du jour is a brief tour of the Paramount Studio lot that is sorely lacking on history and detail. The strongest featurette is “Mr. Yunioshi: An Asian Perspective”, a look at the portrayal of Asian characters in film and television through the eyes of Asian-Americans. You trace the silent Caucasian stars who played Asians, usually as heavies (such as Charles Middleton’s Ming the Merciless) and how Rooney’s portrayal, wince worthy as it is, was a product of the times. Kudos go to George Takei as Hikaru Sulu, the first non-stereotypical Asian on television and film.

The movie is a delight, nearly fifty years later, and the special edition is a worthy addition to your collection.