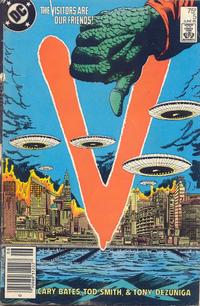 * V for ABC: ABC has announced that they’ve picked up the pilot for a remake of "V". Oh, don’t pretend you don’t remember the series. If nothing else, we wrote about it back in October.

* Shooting on Spielberg’s Tintin has finally started. Although I have to ask– $100 million budgeted for a motion capture film? Good grief. I would have pegged it at about $80 million.

* Cripes, now they’re laying off folks at Publisher’s Weekly, including editor-in-chief Sara Nelson and about 7% of the staff. So far, Calvin Reid and Heidi Macdonald are unaffected directly.

* And finally, Gene Roddenberry and Majel Barrett Roddenbery’s ashes will be shot into space next year, together in infinite eternity… unless they were picked up by V’G’r.