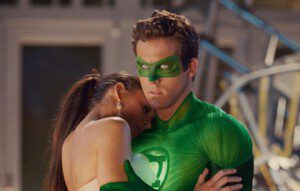 For those paying attention, Green Lantern’s failure to remain in the domestic box office top five has to be of concern to Warner Bros. The film took in an estimated $6,270,000, down a steep 65% from the second weekend which was already down a steep 66.1% from the opening weekend. This means that the core geek audience expected to revel in the galactic adventure multiple times decided once was enough and word of mouth was not positive enough to make up the difference.

Beyond that, the studio gambled on the 3-D effects being a lure but by the time the movie opened June 17, the warning signs were already crystal clear that 3-D was once more a passing fad and not a silver bullet to re-energize theater going habits.

After 17 days in release, the movie has taken in approximately $101,962, about a third of what was spent on production and marketing. The international box office has been anemic as well, with just $33.3 million taken in so after three weeks, the film has not cracked the $200 million barrier that would have at least allowed Warner and DC Entertainment to save face.

And while Warner has commissioned work on a second script, there is no guarantee that they will invest in an expensive sequel. The mantra among the fans is that it took Paramount two films before they got Star Trek right but DC had a lot riding on this as their first entry into the shared universe superhero market and attempting to compete directly with Marvel. A core difference between the rivals is that Marvel’s production arm is independent of studio interference while DC’s Creative Officer, Geoff Johns, still has to dance to Warners’ tune. There’s no direct evidence that Warner execs meddled in the film, but if they didn’t then the film’s disappointing commercial results has to be placed at Johns’ feet.

Should they choose not to go forward with a sequel, Green Lantern will continue to headline multiple titles from DC plus continue his animated adventures on the Cartoon Network. It will, though, limit his merchandising appeal which will affect the conglomerate’s bottom line.

How this may impact the films already in development, notably The Flash, Johns’ other baby, remains to be seen. In some ways, not having it before the cameras means there’s plenty of time to take the lessons learned and apply them. On the other hand, Marvel has already staked two key dates in 2013 (for Iron Man 3 and Thor 2) so if the DC Universe expects to compete on the silver screen, there has to be energy expended to get things rolling.