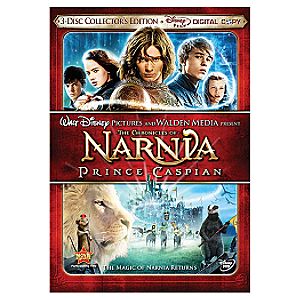 The biggest problem with the film version of [[[The Chronicles of Narnia]]] is that it cannot escape comparisons with [[[Lord of the Rings]]], much the same way the C.S. Lewis books were frequently measured against his contemporary, J.R.R. Tolkien.

[[[Prince Caspian]]], the second film from Walden Media, ups the ante a bit with a more assured and sumptuous production compared with [[[the Lion, The Witch and the Wardrobe]]].  Director Andrew Anderson has grown as a filmmaker and the movie benefits from his surer hand, both in terms of storytelling and scope.

And yet…in look and feel, Narnia feels generic. The sets, the costumes, the New Zealand locations, the score, it just all looks way too familiar. Rather than transport us to something fresh and different, we’re given pretty but bland material.  The Pevensies also come off poorly because we’re told more about their themes and personalities in the perfunctory background extras than we’re given in the finished product.

We pick up a year later in London as the Pevensies are in an underground station before they’re magically summoned to Narnia in the realm’s time of need.  But, before leaving our world, we get a mere hint of what these four kids have experienced since returning home.  When last we saw them, they had grown up, had ruled as Queens and Kings of the land for at least a decade before they returned home and to their natural ages.  Rich material that is ignored.   Lewis ignored such characterization so Anderson follows suit.

Once they arrive in Narnia, they learn 1300 years has passed.  Oddly, while the Telmarines have gained ascendancy, technologically, nothing has changed.  What has occurred in the intervening years to retard such development?  No clue, it’s ignored.  Instead, we get faux European people having a lovely political fight as Prince Caspian (Ben Barnes) flees for his life in the wake of his Uncle Miraz (Sergio Castellitto) now in possession of a son, an heir through which he can claim the throne.  When chased, he uses Queen Susan’s horn and summons the old guard. 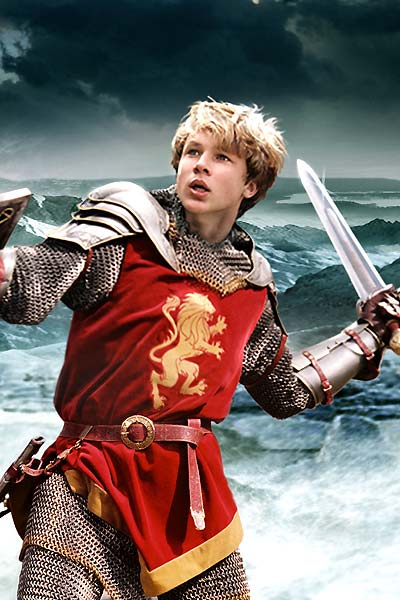 As the Pevensies sort out the politics and learn how their beloved Narnian subjects have suffered, we should be gaining insight into the four people and their reactions.  Instead, Anderson moves them swiftly along to keep the story moving.  Now, at 2:30, it’s hard to imagine finding time for things like characterization but we learn more about Caspian and Miraz than we do our heroes.

The four have grown up nicely and their acting has improved but one wishes they were given more material to work with. All see more action, especially Peter (William Moseley) who duals Miraz to kick off the final act. But before the dual can begin, we get a siege set up that pales in comparison to [[[The Two Towers]]].

As for the religious trappings, they’re mostly scrubbed away and Aslan remains the dues ex machine figure in the tale.  He’s spoken of throughout but of course doesn’t do much until things get really, really bad.  Then he roars, summons Tolkien’s Ents and King Neptune and things get much better.

Seen it before and seen it done far better.

The extras, on the two-disc collector’s edition, now on sale, delve into the eight month shoot in New Zealand and Czechoslovakia with some nice material.  We get deleted scenes and even some bloopers to show off how much fun they had. A spotlight on Warwick Davis is nice although Peter Dinklage does a more nuanced job as a fellow Narnian.

The discs are handsome and currently come with a digital copy for home compute ruse.  The transfer is crisp and sound excellent. If enough people buy the various editions, the third film may very well get made so your purchase acts as a vote.