The Crime Scene: “Turning Biminese”
From [[[Showtime]]]: “While Dexter struggles with how to handle Rita’s desire for them to move in together before they get married, Miguel tells Dexter about a husband who has gotten away with killing two of his wives for financial gain. For Dexter, this seems like the perfect candidate to satisfy his dark urge and his need, like every man under relationship pressures, to get away. Dexter tracks the murderer to Bimini. While on the hunt, Rita has a medical emergency and he is nowhere to be found. Meanwhile, Debra works with Anton, her confidential informant to track down one of Freebo’s criminal confidants. But Debra finds herself oddly (and disgustingly) attracted to Anton.”

Blood Spatter Analysis
“Turning Biminese” is a weirdly unfit title for one of the most defining moments in [[[Dexter]]] history. The whole hour focuses on just how drastically Dexter’s life has and will continue to change by the impending birth of his child and his newfound engagement to Rita, among a whole slew of other things. By episode’s end, it’s very clear that Dexter’s life is about to get very, very different.

Dexter and Miguel Prado continue to bond, with Prado confiding that he’s having trouble convicting a guy who has killed his previous wives for financial gain. Dexter decides to take justice into his own hands, as he often does. Before he sets off to track down the victim in Bimini, Dexter gets into a fight with Rita over what should be a no-brainer: now that they’re getting married, Rita wants Dex to sell his apartment. But to Dexter, his apartment is his sanctuary, a private place where he can do his studying and keep his “work life” away from Rita. Clearly, change isn’t a good thing at all for Dexter Morgan.

The apartment is just one representation of how Dexter’s life is changing. It’s his moment of realization that his secret life will become very difficult to maintain once he marries into Rita’s household. Later, on the beach of Bimini, Dexter has a vision of his father who tells him: “What’s yours is Rita’s.” That’s a general rule of thumb when marriage enters the occasion, but the words have significantly heavier weight when it comes to Dexter. The Lyla Factor nearly turned deadly for Rita and her children last season, proving just how accurate Harry Morgan’s statement is: Dexter’s secret life, no matter how secret, always has potential to creep into his public persona and claim those close to him.

What Dexter needs to decide is how to balance his relationship with Rita and that with his “Dark Passenger,” as he calls his killer instinct. In the vision sequence — which, I might add, is an interesting new utilization of Dexter’s father — Harry tells Dexter that they aren’t very different at all. Just as Harry cheated on his wife with Dexter’s birth mother, Dexter is cheating on Rita with his Dark Passenger. The fact that Dexter’s even having this internal conversation is evidence enough that he’s aware of the problem, if only at a very subtle, subconscious level. Finally, when Dexter returns from his mission to a slew of voice messages from a hospitalized Rita, our hero rushes to her side and concedes that his child’s safety, which had been in doubt, is surprisingly a relief rather than a burden. Dexter admits to himself that his urge to kill needs to take some steps back to his new role as a father.

But man oh man, when Dexter kills, it’s glorious. In the previous installment, Dexter’s hands were clean of blood. Definitely not the case this time. The viewer gets to see the whole ritual for Dexter, really savoring all of the moments, despite the more frantic than usual pace of the kill. We’re treated to the reconnaissance work, the sabotage, the preparation-by-plastic, and, of course, the killing blow. All the while, Dexter speaks quickly to his victim as he has a boat to catch. In the background, he blasts David Bowie’s “[[[Changes]]],” an appropriate choice given the content of the episode. When he delivers the fatal stabbing, there’s less elation on Dexter’s face than there is melancholy. There’s an understanding that this is something he must do, rather than something he necessarily wants to do. Regardless, the whole scene is fantastic, and capped off perfectly with Dexter tossing out the body parts, including the victim’s severed head, into the ocean. It’s just classic Dexter. With so many things ch-ch-changing for Dex, we can only hope this aspect never does, especially with two more seasons lined up at Showtime. 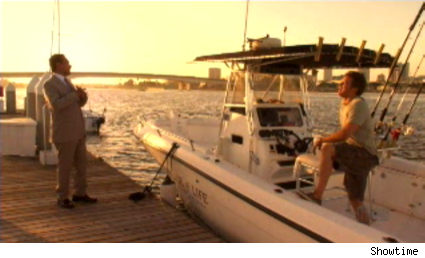 One aspect of Dexter’s killer personality is almost assured to change, however. In the episode’s final moments, Prado reveals to Dexter that he told him of the Bimini killer to see if he’d take justice into his own hands. Prado says that the man’s been reported missing, and considering Dexter wasn’t fishing in the location where he said he’d be, Miguel declares that Dexter must have killed the guy. But rather than show disgust for Dexter’s dark habit, he smilingly grabs him by the shoulders and declares: “You have nothing to explain to me. Nothing to apologize for, ever. I’m with you. I’m behind you. And I respect you.”

Dexter monologues about how everyone who ever learned of his murderous secret has reacted in some terrible fashion. Harry was disgusted, his brother Rudy became a copycat killer and his brief lover Lyla sympathized with Dexter as sad and alone. With Miguel, the reaction is something totally unique: he’s proud of Dexter. Already, Dexter began wondering if Miguel was someone he could trust. Now, with Miguel’s reaction to learning of Dexter’s private side, the question is both more and less clear. On the one hand, it’s fairly obvious that Miguel is supportive of Dexter’s vigilantism against those the justice system fails. On the other, it’s possible that Miguel is setting Dexter up, or perhaps when push comes to shove, he won’t have the stomach for this kind of business. Either way, Dexter is facing down either his greatest blessing or his greatest curse… a true friend, or a true foe. Which one Miguel Prado is remains unknown, but one thing is certain: if Dexter’s life hadn’t already changed forever, it certainly has now.

The events of “Turning Biminese” are life-altering for both Dexter the man and Dexter the show. Dexter’s stepping into his role as a husband and father will force him to either curb his deadly appetite, or at least control his manners better. Further, the inclusion of Miguel Prado into Dexter’s secret life is certain to provide many thrills and much excitement for the rest of the season. “Turning Biminese” is absolutely a defining moment for the character and the series of Dexter.

The Next Victim: “Si Se Puede”

From Showtime: “Dexter suspects that Miguel is on to his dark-side job and decides to test him; Rita gets fired from her job and begins to question her career path; Debra thinks she somehow contributed to another homicide that’s related to the case she’s working.”