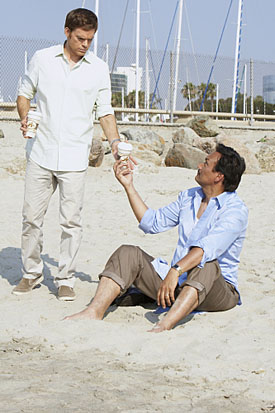 The Crime Scene: “All in the Family”
From Showtime: “After a botched marriage proposal, Dexter has to figure out how to convince Rita that he is looking for more than a convenient merger of finances and fatherhood. But Deb’s case of a woman’s murdered fiancée offers hope for [[[Dexter]]] in strange ways. Meanwhile, Miguel’s brother, Ramon, is going off the rails in the hunt for their little brother Oscar’s murderer. Unfortunately, Oscar’s (supposed) murderer was killed by Dexter Morgan, and that’s something he desperately wants to keep secret.”

Blood Spatter Analysis
Dexter‘s latest installment, titled “[[[All in the Family]]],” gives the audience its first opportunity to really check in on all of the show’s leading characters. Be it LaGuerta, Masuka or Dexter himself, no stone is left unturned, offering the season’s first ensemble driven episode.

This week, Dexter struggles with two different dilemmas. Dexter and Rita’s announcement of their pregnancy is met with a mixed reaction from Astor and Cody. Cody is psyched to have Dexter as a dad, but Astor is upset that the couple isn’t getting married first. Throughout the episode, Dexter tries to justify to himself the need to marry Rita, even though she makes it clear that she’s not looking for an engagement ring. After a string of events, including Rita getting fired from her job, Dexter makes an official proposal to his girlfriend, essentially asking her entire family to marry him. Now engaged, Dexter’s likely to find that the complications between his relationship and his murderous habit will only get more complicated when marriage enters the picture. The look on Dexter’s face at the episode’s conclusion indicates that he has an idea of just how hairy his situation is going to get.

Dexter’s other conflict is the Great Prado/Freebo Debacle of 2008. Miguel wants to let his younger brother, Ramon, in on the secret that Dexter killed Freebo. Naturally, Dexter’s not exactly into the idea given his dark needs. Worse, however, is Ramon’s erratic personality. Even if Dexter were to trust someone with his murderous secret, Ramon is far from the top of his list of potential confidants. Dexter figures out a way to get Ramon off his back without killing him, demonstrating that he has other tools in his toolbox other than a scalpel.

Speaking of toolboxes, we learn that Debra Morgan’s arsenal as a police woman requires some expansion. She takes the lead on a case involving a murdered man with his fiancee left alive as the only witness. With Dexter’s help, she realizes that the woman is the killer. When she confronts her, however, Detective Quinn pulls her off the interrogation for being far too aggressive. He goes on to gently persuade a confession from the man’s fiancee. Later, Quinn tells Deb that “the only tool in your toolbox is a hammer.” She knows he’s right, but is too pissed off to truly admit it. In fact, Quinn proves himself a more than capable cop this week, if not a clean one. Nonetheless, Deb continues to feel pressure to participate in an Internal Affairs investigation into the detective. It’s just a matter of time before Deb takes the bait. 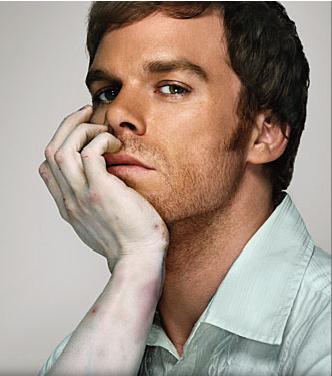 For the first time all season, LaGuerta gets called out on her relationship with Doakes, killed last season and framed for the Bay Harbor Butcher slayings. When LaGuerta presses Miguel to consider evidence against one of his convictions, Miguel posits that LaGuerta still feels that Doakes got a raw deal, and is transferring those feelings onto this current situation. LaGuerta later turns the evidence over to Miguel’s rival, claiming that she wants to see justice done. While that’s certainly true to a degree, it’s also likely that Maria didn’t like hearing Miguel talk about Doakes that way. Somewhere up in police heaven, Doakes is smiling his big goofy grin.

Angel, recently promoted to sergeant, takes an interesting turn when it’s revealed that he’s been seeing prostitutes. He’d been talking about his wife and daughter all season as if his marriage was intact, but that turns out to be a lie. He’s nearly busted when the prostitute he’s hired reveals that she’s secretly a cop, but rather than bring further embarrassment to the division that harbored The Bay Harbor Butcher, she chooses to give Batista a pass. That’s not before Angel emotionally reveals that he needed to connect to someone since his wife left with his little girl. “I’m a divorced, alcoholic cop,” he admits, heading closer to a walking cliche every day. Batista, whose typically seen as a comedic character, gets to ratchet up the emotional drama with this new development. It works quite well.

The character work is excellent in this episode, and the plot is developed in important areas, but the season still moves at a slower pace than previous years. Dexter gets engaged, he gets Ramon Prado off his back (for now) and Deb moves closer towards agreeing to investigate Quinn. Despite all this movement, it’s just not as fast as other seasons have been. It’s not exactly fair to hold this season up to the past years. The first season was naturally high octane as the show’s debuting story-arc, and the second season’s momentum was undeniable given Dexter’s role as Miami Metro’s prime target. The premise for this season involves Dexter sweating out whether or not he can trust Miguel Prado with his dark secret. As such, the season moves at the same pace as Dexter himself, still unsure of whether his killing of Freebo, and consequently his other deeds, will come to light. The pressure isn’t quite as grand scale as season two, therefore allowing season three to move at a less frantic and more strategic pace. It’s definitely different than Dexter fans are used to, but change isn’t always a bad thing.

Coroner’s Assessment: B+
Overall, “All in the Family” is an excellent solo edition of Dexter with some very important repercussions for the remainder of the season. It’s lack of focus on larger mysteries, such as the square shaped killings, is slightly frustrating, but it’s made up for with wonderful character work and the latest development in Dexter’s love life.

The Next Victim: “Turning Biminese”
From Showtime: “While Dexter struggles with how to handle Rita’s desire for them to move in together before they get married, Miguel tells Dexter about a husband who has gotten away with killing two of his wives for financial gain. For Dexter, this seems like the perfect candidate to satisfy his dark urge and his need, like every man under relationship pressures, to get away. Dexter tracks the murderer to Bimini. While on the hunt, Rita has a medical emergency and he is nowhere to be found. Meanwhile, Debra works with Anton, her confidential informant to track down one of Freebo’s criminal confidants. But Debra finds herself oddly (and disgustingly) attracted to Anton.”