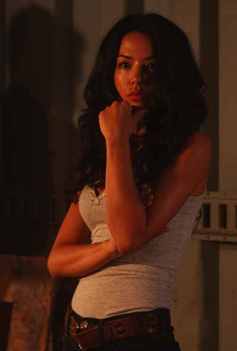 This Week’s Operation: “The Tower Is Tall But The Fall Is Short”
From Fox: “What would a T-1001 need with a Doctor? Sarah, John and Cameron may soon find out as they track down another name on their list. Elsewhere, a woman from Derek’s past surprises him in the present.”

Damage Analysis
“The Tower Is Tall But The Fall Is Short” is the first episode of [[[Terminator: The Sarah Connor Chronicles]]] in two weeks, and it’s about as good as the show typically offers. There’s interesting character development, including the introduction of a new player in the war against the machines.

The episode focuses largely on Catherine Weaver, the secret liquid metal Terminator in charge of ZeiraCorp. As per the episode summary, it looks like Weaver is not a T-1000, but a T-1001. Big difference, folks. It’s an established fact that Terminators can impersonate preexisting humans, but this episode insinuates that the Weaver we know has been impersonating the true Weaver for at least a couple of years. Catherine’s awkwardness around her daughter Savannah makes a lot of sense given that, well, she’s a robot and the kid’s a kid. Not exactly a match made in heaven, unless you’re Arnold Schwarzenegger. Shirley Manson might not have the sickest acting chops on the planet, but she pulls the part off serviceably, all the while adding an interesting new villain in the mix. And, once again, we feel awful for poor Savannah, who has no idea that mommy dearest has more in common with a toaster than she does with her. 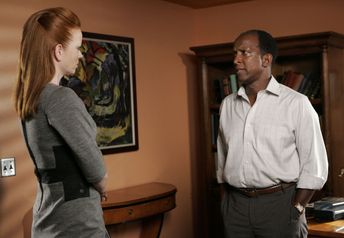 John Connor also gets a lot of play, allowing Thomas Dekker more flexibility as an actor. It wasn’t easy adjusting to Dekker as Connor at the series’ outset, but he’s certainly grown more comfortable with the character. In this episode, you get a sense of why John has been acting so angsty lately: it’s revealed that back in the season premiere, “Samson and Delilah,” John killed Sarkassian in order to save his mother. As a psychologist named Dr. Sherman explains, it appears that John is suffering from post-traumatic stress disorder, not unlike a war veteran. Thankfully, the show is beginning to address the fact that John’s been through the grinder lately with the weight of the world squarely on his shoulders.

Given that, it’s kind of ridiculous that Sarah, Derek and Cameron would allow John to go anywhere unattended, especially to a psychologist’s office. Sure, it’s part of a stake out, but John’s an emotionally fragile mess, and rightfully so. Cameron should’ve recognized straight off the bat that John might risk important intelligence during a moment of vulnerability. It’s possible that they felt more comfortable since the shrink’s office was bugged, but still, John’s the salvation of the future. You’d think that his overprotective clan would take that a bit more seriously.

Stephanie Jacobsen makes her debut as future resistance fighter Jesse. I just watched [[[Battlestar Galactica: Razor]]] for the first time recently, so I had Kendra Shaw fresh in my mind when Jacobsen first graced the screen. Needless to say, for anyone whose seen Razor, it’s clear that Jacobsen can play dangerous. Jesse, who is Derek Reese’s lover in the future war, looks to have been taking surveillance of the Connor Clan. Who knows what the reason is, but she’s certainly not a mere war deserter as she claims to be. Regardless, Jacobsen is a welcome addition to the cast, although the odds of her having any sort of longevity are pretty minimal on a show called T[[[erminator]]]. 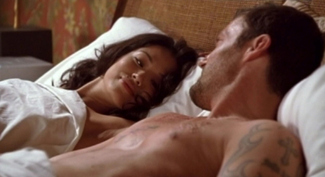 And therein lies an odd contradiction seen in this installment. A female Terminator from the future shows up and gets into an all-out brawl with Cameron on an elevator. As the two proceed to beat the mother-loving heck out of each other, a family boards the elevator with the fighters. The robots cease their battle in some sort of attempt to avoid confrontation with the family, then resume their brawl after the family leaves. I can forgive that for Cameron, but the other woman is a straight up Terminator, no good guy programming or anything. She shouldn’t have a code of ethics like Cameron does. The scene was put in purely for comedic effect, just a silly gag to get a few cheap laughs. But it doesn’t work, coming off as completely forced and disingenuous.

It’s those little moments, the forced and contrived stuff, that really bring Terminator down. The series is full of excellent ideas, such as The Turk advancing beyond artificial intelligence to gain a sense of humor. There’s also some funny moments, like Dr. Sherman misdiagnosing Cameron with a mild form of autism. The concept of a robot with a social order is just bizarrely amusing. Still, Terminator struggles to find a firm footing this year with its confused, all-over-the-place story. Ironically, despite its poor critical reception and low ratings, the series got a full season order that all but insures a stay of execution for Sarah Connor. Combining the poor reviews, lack of audience and the show’s production value, one has to wonder if Fox made the right call in giving Terminator another shot at life.

Final Assessment: B-
“The Tower Is Tall But The Fall Is Short” isn’t a bad episode, but a wholly unimpressive one. Coupling a poorly defined plot and questionable writing choices, Terminator amounts to little more than an amusing way to spend your Monday night, unlike genre fair with real substance like [[[Lost]]] and Battlestar Galactica.

In The Future…
From Fox: “The Connors find themselves on high alert and in odd company after their house is robbed. Elsewhere, one Terminator terrorizes Ellison, while another gets dangerously close to John Connor. Meanwhile, Derek and Jesse continue to get reacquainted.”