Out of The Box: My Day in the Netflix Movie Watching World Championship

For those of you unaware, last week I took part in the Netflix Movie Watching World championship, in which eight contenders were put in a glass living area in the center of Times Square where we had to break the record for most films watched in a row without averting our eyes from the screen or falling asleep. The current record was 120 hours and 23 minutes, so we had our work cut out for us. There were 10 minute breaks in between each film, in which we could use the bathroom and wake ourselves up, but beyond that, our eyes had to be fixated on the 56 inch Plasma television. Whoever was to break the record (and there could be multiple winners) would win the Golden Popcorn Bowl trophy, $10,000 cash, and a lifetime membership to Netflix.

I was one of the three contenders selected from an online competition through Facebook.com, and among the others were competitive eating champion Crazy Legs Conti, former Netflix Movie Marathon champion Cheryl Jones, winner of Who Wants to Be A Millionaire: Movie Edition Jeff Jones, German champion who broke the world movie watching record three times, Claudia Wavra, and Guinness record holder for breaking the most Guinness records, Suresh Joachim. Needless to say, I was the underdog in this competition, seeing as how the longest I’ve ever stayed up in my life is 48 hours, and that’s all while doing things like driving or moving around.

Each of the competitors were asked to suggest films, and luckily the first film in the marathon was one of my picks: Iron Man

. This would have been a lot of fun to watch again (let alone in the center of Times Square), and if I wasn’t so nervous about not taking my eyes from the screen, I would have. After talking to a bunch of the other competitors, I realized they had the same problem. Once we were able to overcome the excitement of being in the center of New York City with dozens of flashing cameras and gawkers, it became easier.

, which I had never seen. This seemed to be the trick because for the films I’ve seen already, I caught myself getting bored and letting my mind wander–which was no good. Next picked up the pace a bit with Ghostbusters

, one of my favorites. I had no problem getting through this film. Two movies and 4 hours into the marathon and I was feeling pretty good until the third film.

is a great movie if you haven’t already seen it, and I missed it in theaters and wasn’t interested enough to run out and buy the DVD. I rented it about two weeks ago and enjoyed it, but I would certainly say that the film has about one viewing in it, at least per year. Sadly, this was movie number three, so I didn’t get the luxury of waiting a year. This was rough, because as much as I enjoyed the movie, it was barely enough to keep me interested for another two hours.

Movie four picked up the pace once again with the delightfully campy Elvira: Mistress of the Dark

. This is when all of the competitors started to have more fun, as we all decided to count the "bad boob jokes", and after 23 jokes that Fozzie Bear wouldn’t even touch, we made it past Elvira and onto the first speed bump: The English Patient

This seemed like just a form of malice when I saw it on the list, but after 12 hours into the competition, I was a bit too loopy to really care. It was supposed to be the hardest movie to make through, but because of my lack of sleep at this point all we did was MST3K our way through the movie. I would like to mention though, that this movie was pretty awful, and pretty on-par with other manipulative romance films like The Notebook

or The Lake House

, if you are of the male gender, stay away from this film.

The next stint of movies was supposed to "wake us up", but they had to have been the most boring collection of action and science fiction movies you could sit through. Many may like them, but The Matrix

are three action movies that will more than likely put you to sleep, and fast. They are great in retrospect, but if you were to watch them again today, you could take small power naps in between the parts without action. 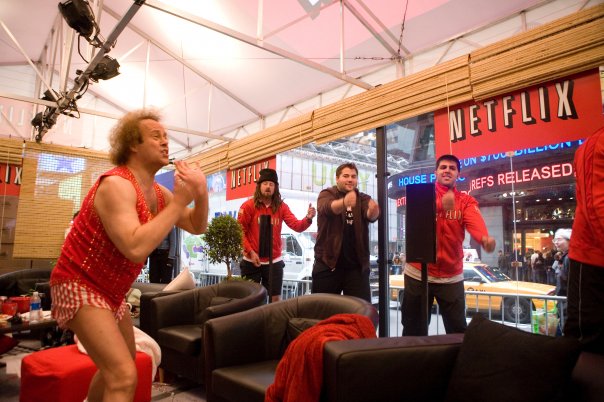 It was about 9 a.m. on Friday at this point, and we are 21 hours into the competition. Things started to look a bit hazy, but luckily we had our first celebrity guest to stop by and run around: fitness guru Richard Simmons. For those of you who remember Simmons’ TV show from the 80s or even seeing him on General Hospital and wonder if he’s that outrageous and hyperactive in real life, I can assure you: he is. After 21 hours into the competition and 26 actually awake, Simmons’ face screaming at me to "dance harder" wasn’t exactly the first thing I wanted to see or hear. Nevertheless, our first exercise session was over and we moved onto Dodgeball

Barely making it through this movie, I started feeling the exhaustion. My eyes became heavy, I started questioning why I was actually staying awake, and overall doubting myself. Getting up and jumping around got me barely through the flick, and onto our second dance-a-thon. This became a blur because of just how incredibly tired I was and we were approaching movie 11 and hour 23.

The next flick, and sadly my last, was the Marx Brothers classic A Night at the Opera

. While it wasn’t the best of the Marx brothers film by far, it was the only one that made it past the 90-minute prerequisite. I was starting to slip about halfway through the movie, then got a bit of a second wind and my body completely shut down inside of the last five minutes of the movie. It’s funny how when your body needs sleep, your brain really can’t do anything about it but I didn’t even remember closing my eyes.

I think one of the hardest tasks during the competition was eating during the films. We were allowed to eat a wide selection of food that Netflix prepared, including some great gourmet popcorn from Dale & Thomas Popcorn, but the biggest issue was that we were unable to look down at our food. I’m a bit of a picky eater, so when I got handed a sandwich and asked "what’s in it" and one of the aids responds "salami" and nothing else, I realized it wasn’t going to be a fun experience to eat. Instinctually, everybody looks at their food at some point or another when eating, it’s habit, but if you were eating something prepared by a stranger and physically UNABLE to look down, I doubt you would enjoy it at all. I had to play the Pepsi Challenge with each thing in the sandwich to try and figure out what each thing was and I’m still not quite sure if one piece was an onion or not.

Still, breaking my own personal goal, I made it one day almost to the dot, clocking in at 23 hours and 56 minutes and watching 11 movies without breaking focus. In closing my eyes for an "extended blink" for about five seconds, I was disqualified from the competition, and much like a slutty girl in week two of Rock of Love, I was told to pack my things and go home. I did get to go back to my hotel room and crash for about 12 hours and later kick myself for not standing up during the last five minutes to refresh myself but I overall had an amazing time and would do it again in a heartbeat….with a little more training. You can check out my failure first hand here: