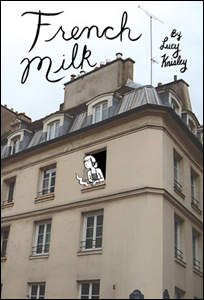 These days, people record their every inner thought and deed via Twitter, LiveJournal, Facebook and other social networking sites.  It’s a fast and easy way to tell the multitudes what you’re up to.  This is especially true for people who travel far from friends and family.

As a result, Lucy Knisley is a throwback.  The 23-year old grew up on comic books and has studied art in Chicago and New York, developing a distinctive style and voice that earned her a small but dedicated following. She recorded her six week sojourn in France by using pen and paper, recording a graphic diary of her trip to celebrate her 22nd birthday and her mother’s 50th.   Upon her return, she gathered up her dozens and dozens of pages and self-published through Monkfish Book Publishing.

While showing [[[French Milk]]] to people at a MoCCA event, she was discovered by Amanda Patten, senior editor at Fireside/Touchstone.  Now, the book is receiving a big PR push and is on sale as today and has already been receiving positive notices.

Knisley has a keen eye for atmosphere and detail, finding joy in the simplicity of a baguette or a rude American tourist. Her observations are sharp and we can share her delight in fresh, unadulterated whole milk, from which the book takes its name.  We follow mother and daughter as they sightsee, shop, dine and relax together.  She does a nice job recording the details to bring their flat to life along with shops, Laundromats and restaurants.

The book’s publicity tells us of the changing relationship between moth and daughter but the book barely scratches the topic.  There’s one sequence when mother tries to discuss financial planning to Lucy but that’s about it.  They share the flat and bed and seem to get along without any tension, quarrel or serious issue.  Lucy Knisley, it seems, missed having sex but remained faithful to her boyfriend, whom she stills has a relationship with. But she seemed content to be a homebody and never craved going out to experience Paris nightlife on her own with people her age. If anything, the relationship seemed very close and stable.

The pair had been to Paris before and her observations about seeing things after a few more years’ growth and maturity is interesting.  But her diary is all surface.  We did this, ate that and went to sleep.  There’s precious little about the culture or differences with her life back in the states.  Her observations are all micro with no attention paid to the larger issues facing a young woman on the cusp of adult independence.

The book benefitted from the occasional photograph so we can compare the real people with Knisley’s fun drawings.  It could have benefitted from some summing up beyond a one-pager at the end.

Knisley has great potential and she’s working hard to achieve her place in the comics field.  This is a terrific, albeit flawed, first major effort. Her current material at Knisley’s website show continued development.