Review: ‘Love and Other Drugs’ 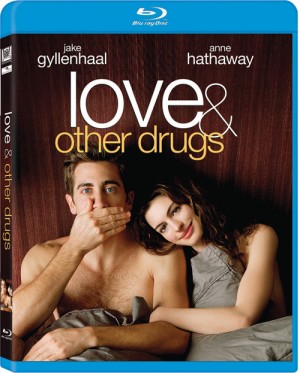 Romantic comedies have become such a formula that filmmakers either follow the dots or strain to find a new spin on the concept. We all now the routine: establish your characters, give them oddball sidekicks, have the couple meet cute, begin to fall in love, have some complication that separates them then reunite them for the finale. Done well, it can be a terrific film-going experience and make for a fine night out with your significant other. Done less well, you feel like you wasted your time and money.

Then, there’s [[[Love and Other Drugs]]], which is out this week on DVD from 20th Century Fox Home Entertainment. It follows the formula for the most part, but varies it enough to keep you interested but doesn’t give you that uplifting feeling you want. A valiant effort, it fails to transcend the form when the cast and crew’s pedigree led you to expect it.

Directed by Ed Zwick, the movie is inspired from a memoir, [[[Hard Sell: The Evolution of a Viagra Salesman]]], with the handsome Jake Gyllenhaal playing author Jamie Reidy. After getting through life on looks and charm, Jamie lacks ambition. In his heart, he wants to be a doctor, but refuses to do the hard work, mostly to spite his overbearing father (George Segal). As a result, he bangs anything with a XX chromosome and hits a dead end. Jamie finds himself training to be a pharmaceutical rep for Pfizer and shipping out to the Ohio Valley. Under the tutelage of a veteran road man Bruce (Oliver Platt), he masters the way of charming the women who barricade salesmen from the doctors. Once more, his surface qualities make a difference, but even then he cannot make the major Zoloft sale to the region’s biggest prescriber, Dr. Knight (Hank Azaria). He does, though, worm his way in where he meets Maggie Murdock (Hathaway), an artist suffering from an early onset Parkinson’s disease.

After several highly-charged sexual encounters, Jamie finds himself falling for the woman. In the process, he digs deep and discovers qualities about himself he either forgot or never knew existed. Maggie, in turn, has cut herself off from the rest of humanity, letting herself have sex without emotion or entanglement. She refuses to let Jamie in until he wears away at her with his persistence.

The story parallels Jamie’s rise as a salesman, especially after Viagra hits the market, with his deepening romance with Maggie. The barricades around her heart fall ever so slowly and once he is welcomed in, he blindsides her with trying to find her a cure so they can live happily ever after. She’s accepted the inevitable and is angered when he seems incapable and they part until the final act.

There’s a raw honesty shown throughout the story, helped tremendously by Gyllenhaal and Hathaway, whose chemistry from [[[Brokeback Mountain]]] is deepened here. The talk is frank, the sex is vigorous and the casual nudity feels adult and appropriate.

Taking away from the story, though, is the very existence of  Jamie’s wealthy brother Josh (Josh Gad) who adds zero to the story and his comic existence hurts. So does the rivalry with competing salesman Trey Hannigan (Gabriel Macht), since it’s a thread that really goes nowhere. The movie’s script needed better balance among its elements to really work.

The disc comes with several short pieces on the production with three minute sequences with the leads discussing their characters. There are also a few deleted scenes and perhaps the best one here and maybe should have remained was a scene when Jamie takes Bruce to the hospital and he sees an older couple supporting one another in their twilight years, and he clearly recognizes that he is meant to be with Maggie.

It’s a love story, of course, but it is also a story of two people finally allowing their true selves to re-emerge and re-engage with a larger world. Had Zwick focused on that, this may well have been a far stronger, more satisfying movie.