LA-based illustrator, animator, and artist Brian Kesinger has just released his first book, Walking Your Octopus: A Guide to the Domesticated Cephalopod. I first came across Brian a few years ago when I was the judge for the WeLoveFine steampunk tee shirt art contest, where he submitted “Walkies for Otto”. He won that contest and thus started the Internet’s love affair with his adorable characters Otto and Victoria. Since then, Otto and Victoria have grown to encompass books, prints, shirts, and more. Brian was good enough to sit down with me for an interview on his new book, upcoming projects, and the very important question of “why the octopus?”

ComicMix: How did you get started in the arts?

Brian Kesinger: I was fortunate enough to born into a family of artists. The thing is they were all musicians! In fact I’m the only one in my family who couldn’t play an instrument. I was much more fond of drawing than practicing piano. My parents recognized this and were able to support my artistic endeavors all through school and that support has certainly helped make me the artist I am today. 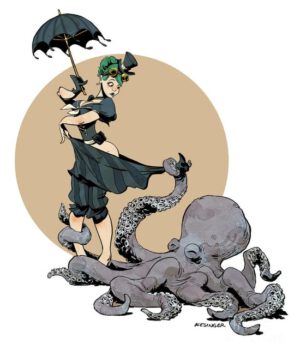 ComicMix: How did all this Steampunk style art you started doing in 2010 come about?

Brian Kesinger: I had been drawing steampunk art before I knew of that term. Back in 2000 I was doing layout and background design for Walt Disney animation studios on the film, Atlantis. It was on that film that a grew fond of drawing submarines, gears and gadgets. After that I moved on to the film treasure planet where I continued my alternate history aesthetics that time with the mixture of tall ships and sci-fi. It wasn’t until recently that I started doing my own steampunk art and I think my passion for the subject matter stems from the education I had on those films.”

ComicMix: Can you tell us a little about the new book you have coming out?

Brian Kesinger: My book, walking your octopus: a guidebook to the domesticated cephalopod is based on two of my more popular original characters, Otto and Victoria. It’s not your typical storybook. It reads more like an owner’s guide to pet octopuses. (Think of a Victorian era “puppies for dummies”)
It’s sort of a satirical look at how we all can get a little carried away with how we raise our pets. It’s certainly inspired by my own dog Scout but also inspired by the ups and downs of raising two young children with my wife. My hope is that the book speaks to not only steampunk fans but pet owners and parents as well. 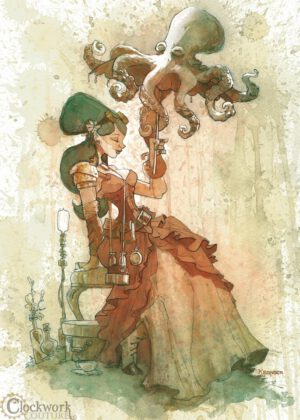 ComicMix: Why the Octopus?

Brian Kesinger:  I find octopuses extremely fun to draw. It is a real challenge inventing eight different things for them to do in every image. They are nature’s original multi-tasker and they certainly have captured the imagination of a lot of people. Along with the squid and other Cephalopods, octopuses seem to be a sort of theme animal for steampunk so when I set forth trying to render an image of a high class Victorian lady and her boutique pet the choice was obvious. What was not obvious was how popular Otto has become since I first drew him a year ago. He has inspired fan art, tattoos and I’ve even seen girls cosplay Victoria and conventions around the country! And for that I am so grateful and it keeps me drawing octopus.

ComicMix: What other things do you have coming up that we all should look forward to?

Brian Kesinger: Well my first love is movies. It’s why I have wanted to work in animation. So I have been developing several short film ideas and in addition to that I am in the very early stages of developing a full length feature of Otto and Victoria’s adventures. I would love to see a beautifully rendered steampunk animated film and I can’t think of any characters better suited for that than Otto and Victoria. Stay tuned for more details!

Annie Award-winning artist Brian Kesinger has loved to draw ever since he could remember. During his senior year of high school, Brian was accepted to the Walt Disney Animation Studios in Burbank, California as the second youngest animation hire in the history of the company. At just 18 years old, Brian became a layout artist and in his 16+ years at Disney Animation, he has worn many artistic hats from visual development to story artist. In 2011, he was honored with a prestigious Annie award for his story work on the hit Disney TV holiday movie “Prep and Landing.” Brian’s most recent film at Disney is the Academy Award-nominated film “Wreck It Ralph” – and if you listen closely, you’ll hear him lend his voice talents to comic bad guy, “Cy-borg.” Inspired by his love of gadgets and fantasy, his delightful steampunk characters celebrate Victorian sensibility and timeless beauty with a dash of geekiness thrown in for good measure. His original “Tea Girls” art is created with different kinds of actual tea – resulting in an innovative visual affect. 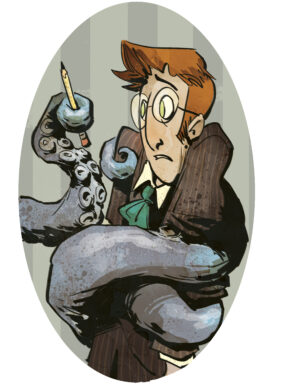