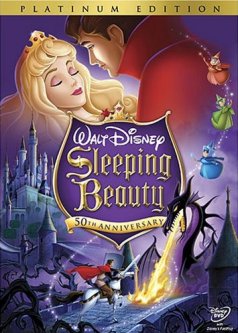 Walt Disney Studios’ [[[Sleeping Beauty]]] holds up as a spectacular work of animation and it looks even better now that the studio has cleaned it up. The classic fairy tale has stood the test of time quite nicely and the Platinum Edition 50th Anniversary 2-disc set, released today, is a worthwhile addition to your home video library. It’s a great artifafct, and the end of an era of amazing animated fare from Disney Studios.  Every anuimated feature that has followed, through today, somehow pales in comparison to this effort.

The first disc of course is the film itself.  Disney’s technicians have painstakingly cleaned the animation so the colors are brighter, allowing us to appreciate the work of animator Eyvind Earle. The story holds up with relatable characters from the adorable Aurora to the three fairies who sacrifice their magic ways to shield the child for 16 years. The humor remains character-based and the story builds nicely to the climax between the Prince and the vile witch Maleficent. The animation remains a sumptuous feast for the eyes especially with the brighter, sharper colors allowing us to enjoy the fine design.  The transformation of Maleficent from witch to dragon remains a very powerful sequence and can still startle the younger viewers.

It was certainly the last of its kind.  The sumptuous design and color, the rendering of the characters and their actions, were painstakingly researched and executed. The movie took years and millions to make, causing Walt Disney concern over the viability of future of animation in the same style. Some of this and other interesting facts can be found on the second disc.  “Picture Perfect: The Making of Sleeping Beauty” is lively because of the archival materials that remain plus the recollections of those like Ollie Johnston, last of the Nine Old Men, and Don Bluth who actually worked on the film.

We see several pieces of footage of actors in costume who performed for a gaggle of animators, which helped the humans move with subtle and broad emotions.  On the other hand, we are treated to deleted songs and sequences via storyboards and remaining recordings.  As a result, you have a better idea of how the film took shape, from the initial concepts in 1951 through its 1958 release.

For the youngest of fans, there is a reading tutorial and “[[[Briar Rose’s Enchanted Dance Game]]]”.

There are additional features on the Blu-ray release, not screened by ComicMix, but it does come complete with a standard DVD version of the film.  It’s a first and a nice way to add to your library without buying new hardware quite yet.

As usual, Disney will keep this in circulation only for a limited time until it is retired and goes into the rotation, not to be seen again for a while.  Grab this while you can.