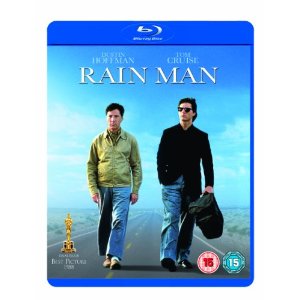 A breakthrough performance can be indelibly imprinted in the collective memory but it can also be easily imitated to the point where it becomes parody. Unfortunately, that has happened with strong work by actors portraying the mental disabled. The arrival of [[[Rain Man]]] on Blu-ray reminds us of how good Dustin Hoffman was and how important spotlighting the needs of these people and their impact on families has been in our society.

For those who barely remember, the 1988 movie earned four Academy Awards: Best Picture, Best Original Screenplay, Best Director, and Best Actor.  After Hoffman won, actors were taking similar roles and mocked for it as their bid for an easy Oscar nomination, forgetting that this is a segment of the population without a voice and with a desperate need for understanding and compassion.

You see that from the beginning as Charlie Babbit (Tom Cruise) is anything but a cuddly younger brother, willing to take on his the burden of caring for his afflicted brother Raymond (Hoffman). Being a 1980s film, Cruise is at wonderfully smarmy best, a yuppie without a conscience, until he spends time with Raymond and learns the kind of man he has become and is humbled by the experience. Interestingly, Charlie grew up a spoiled, morally bankrupt man totally unaware of his older brother’s existence. Just as he was broke and desperate, his father died and the bulk of the wealth, the inheritance he salivated for, was left to someone else. As he followed the trail, he found the Walbrook Institution and finally met Raymond. On the one hand, you can’t blame Charlie for being who he is and on the other, you can blame the father for not preparing the younger sibling for his familial obligations.

Along the way, though, the film takes the characters and the audience on a six day road trip as Charlie tries to exploits his brother’s gifts in Las Vegas. We witness all the odd quirks and tics that make Raymond an amusing presence and an irresistible character for an actor. Hoffman wears Raymond’s skin comfortably and you buy the affliction without question.

You watch two incredibly unalike people grow closer and the audience gets to see how similar they truly are. Raymond can’t relate to people but neither can Charlie as witnessed by how cavalierly he deals with others, including his girlfriend Susana (Valeria Golino). Director Barry Levinson does a terrific job with the characters and the glimpse of an America that has since grown a little tarnished.

The video transfer is clean and unspectacular accompanied by good sound. There are a bunch of extras starting with three audio commentaries: Levinson, writer Barry Morrow, and the other writer Ronald Bass.  Together, they would have been incredibly informative; separately, they are a little tedious. “The Journey of Rain Man” (22:07) is the usual making-of featurette spotlight the audio commentators. “Lifting the Fog: A Look at the Mysteries of Autism” (20:13) is a strong, useful look at the affliction. There’s one deleted Scene (2:13) and that’s about it.

Our appreciation of the film may be different today given how many other media portrayals have heightened our overall awareness of autism and its colorful spectrum. Still, the story and performances make this well worth discovering for the first time or watching again with a little more wisdom and experience.