The world of comic book super-heroes and costumed villains is a dangerous one. And sometimes, you don’t make it out alive.

We all remember the tragic loss of Bucky Barnes when he was blown up while trying to disarm a bomb (although he turned up alive again as a cyborg a few years ago). We can still recall the tragic loss of Oliver Queen, the Green Arrow (who was literally resurrected not too long ago). We’ve reminisced about the sacrifice of Barry Allen, who became one with the universe even as he saved it (and who returned from the dead a couple of months ago). And it was literally front page news when Captain America was assassinated (and he’s actually still dead).

But not all deaths in comics are noble moments you want to remember. Some are just down right … silly. So here are six of the most embarrassing deaths. NOTE: this is focused on super-villains and super-heroes, not just any characters in comics in general. Otherwise we would just be talking about Preacher all day.

Alexander Gentry was going to make the perfect combat armor for America’s soldiers: a suit that made you look like a big fat

porcupine, protecting you with massive quills that could also fire like bullets or emit gas, chemicals and flame. But suddenly worrying that the military wouldn’t pay him for such an invention (perhaps because it made you look like a massive tool), Gentry decided to use the suit himself as a super-villain.

After even modifying his suit didn’t stop him from getting his ass kicked, Gentry figured he was a loser (GASP!) and wanted to change his stripes. He helped Captain America set up a sting operation to capture the Serpent Squad. But things went South real quick and battles ensued. At one point, the Porcupine (whose suit was damaged inexplicably easily) was running to catch one of the Squad members and tripped. But that wasn’t bad enough. He tripped and fell onto one of his own discarded quills, receiving a fatal stab wound. So much for protective armor, huh?

Ross G. Everbest was a shell-shocked Vietnam vet who was horrified when he caught his hero, Reverend Mike, in a drunken orgy. Killing the guy for being a hypocrite, Everbest decided it was his job to cleanse America of all the "fools" who corrupted it (criminals, corrupt politicians, hippies, etc.). He dressed up like Zorro and got himself a disintegrator gun (I guess it was on sale at Army Surplus), then became a lethal vigilante. To remind himself why he did what he did, he took Reverend Mike’s body, preserved it in formaldehyde and put it on display in a glass casket. Gross.

Foolkiller then got into a fight with that weird swamp creature known as the Man-Thing (and one day I’ll be able to say that name without chuckling). During the battle, Reverend Mike’s casket was shattered. A piece of glass flew up and slammed into Foolkiller’s chest, killing him instantly. Oh, the irony! That the reminder of his mission would prove his undoing! If only he had made sure to use safety glass instead, perhaps he wouldn’t be known as the villain who was killed by a casket. Idiot.

You’re a psychotic villain with telepathic powers. You brag to everyone about how powerful your brain is. And yet, it doesn’t occur to you that it might be wise (not only as a telepath but as a normal human being) to armor said brain rather than allowing it to remain on display in a flimsy plastic shell.

Man, can you imagine the look on Psimon’s face when the robotic villain Brainiac killed him by literally shooting his brain out of his plastic skull? Oh, wait. Of course, you can! We’ve got the picture right here!

This event happened during The Crisis On Infinite Earths. Due to the reality warps that happened during that story, Psimon later showed up again, alive and well. Yet he still, to this day, has not armored his brain, leaving him open to another vicious skull-attack by the Joker during Salvation Run. If Psimon doesn’t at least buy himself a bike helmet, there’s a chance that this embarrassing assassination will happen again one day!

So this whiney jerk Frank Oliver was living among kangaroos in the Australian outback, trying to learn how to mimic their leaping ability. After a few years, he did so. This is, of course, impossible given the construction of human muscle and bones, so it was later said that Oliver was a mutant who coincidentally happened to have superhuman leaping ability. Either way, Frank Oliver called himself the Kangaroo and became a criminal, only to have his butt handed to him by Spider-Man. He then went to evil scientist Dr. Jonas Harrow, who gave him a power boost. In return, Harrow wanted the Kangaroo to steal a radioactive isotope for him, forgetting that this is not the kind of mission you trust an idiot to perform.

The Kangaroo broke into a Hudson River lab when Spider-Man showed up. Realizing the Aussie intended to steal an active isotope, Spidey (being a scientist) tried to warn the Kangaroo that it would be really dumb to walk into a room flooded with radiation when God had been kind enough to invent lead-lined suits. Not listening, the Kangaroo opened the door and was immediately disintegrated into a pile of ashes. Moron. 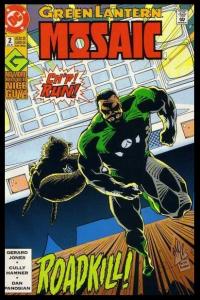 The Green Lantern Corps is an intergalactic police force with thousands of recruits from nearly as many worlds, each armed with a power ring that was limited only by willpower, imagination and a vulnerability to anything colored yellow. One of their members was the alien chipmunk Ch’p, a "monk without fear" who wore a bow-tie, was good at his job and was always one to make his colleagues laugh.

And then in Green Lantern: Mosaic #2, he wandered onto a highway and was run down by a yellow truck.

… Yeah. To make things worse, the cover of that same issue featured Ch’p caught in the headlights of said yellow truck and underneath him was the word "Roadkill!" in large green letters. Seriously, DC, what did Ch’p ever do to you?

Jordan Stryke was the first criminal called "Viper." While en route to prison one day, he was approached by the then-leader of the terrorist cult HYDRA, a green-haired, green-lipsticked woman called Madame Hydra.

Madame H explained that she’d decided "Viper" would be a better code-name for her but didn’t want people to get confused if there were two criminals using that alias. Stryke hurriedly suggested he change his own name, but the lady wasn’t listening and shot down the still-handcuffed super-villain. Poor guy.

Oh, but it doesn’t end there. Years later, the X-Men were in the Hellish realm of the demon lord Mephisto and found Jordan

But we’re not done! Years after that, when Brian Michael Bendis started writing New Avengers, he had the woman terrorist Viper suddenly change her name BACK to Madame Hydra. So, to recap: Strike was killed because a girl wanted his name, had his soul obliterated, and then the girl decided she didn’t want the name anyway. It takes a lot of talent to continually be embarrassed even after you’ve died.

We hope you enjoyed this morbidly humorous list. Honorable shout-outs went to Captain America II (essentially killed by a bear hug), the Communist Red Skull, Alexei Luthor of Earth-2, Jason Todd (killed by a hotline gimmick), and the Immortal Man (seriously, that was your NAME, dude – what happened?).

Alan Kistler could kick the butt of most of the people mentioned on this list. He has been recognized by mainstream media outlets such as the New York Daily News as a comic book historian, and can be seen in the "Special Features" sections of the Adventures of Aquaman and Justice League: New Frontier DVDs. His personal website can be found at: http://KistlerUniverse.com. One of these days he’d love to write for DC, Marvel or Doctor Who.