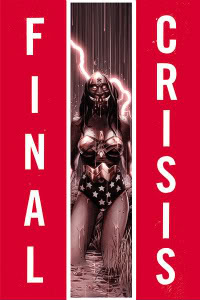 I may as well just get this out of the way up front: in my opinion, Final Crisis #3 is one of the worst comic books I’ve ever read.

Coming into this event season, I had high hopes for DC to regain some of the Infinite Crisis magic, but after three issues (sorry for the delay, but I was away from comic shops and the Internet) the latest and likely not last Crisis has clearly entered the realm of train wreck.

And yet many comics critics posted some largely favorable reviews. "I can’t wait to see what happens next!" said one not atypical reviewer.

Throughout many reviews, the critics looked at writer Grant Morrison’s approach of stringing together flashes of disparate stories into making a larger narrative and praised how new and challenging it is. There didn’t seem to be a single bizarre element he used that couldn’t elicit a glowing remark.

When reading those comments, I immediately recalled this quite-good essay by B.R. Myers on The Atlantic Monthly Web site. Writing about contemporary literary fiction, Myers complains that today’s writers have become obsessed with style at the expense of substance.

We are supposed to have entered a golden age for fiction, he writes, and yet readers don’t pick up literary fiction en masse, or much at all. Myers offers a simple explanation: the books are all self-absorbed fluff, and the nuts and bolts of telling a story have been left by the wayside.

Which brings us back to Final Crisis.

Frankenstein (who only Morrison fans know) shows up at a crime scene, where an unidentified guy is dead and the new Question is already there, but runs out. Some heroine falls out of the sky, speaks German, then apparently dies. The Monitor-turned-human loses his crappy job. The three Flashes run through time to catch a time-travelling bullet, and somehow Barry came back, and the Black Racer hovered over them. Libra used the anti-life equation to take control of more villains. Clark Kent keeps Lois alive by using his heat vision on her heart. Hal Jordan is suspected of murder for no good reason. There’s a superhero draft, which was never needed before. The Japanese superteam (also only identifiable to Morrison purists) assemble. Mary Marvel punches a giant Dalmation’s head off, then uses a vial of green stuff to turn Wonder Woman evil. And, last but not least, Oracle shuts off the Internet.

I’m sorry, but this is garbage. It’s a big pile of nonsensical stupidity, with each new page trumping the last.

And, even worse, it’s completely inaccessible to anyone outside of core DC readers. Morrison’s fancy stylings (telling the story in bursts) relies on readers to know Jack Kirby’s Fourth World material and the past year or so of DC comics, even though it regularly contradicts what happened in Countdown and elsewhere.

But it also has no clear story, just little separate moments of violence that we have to trust Morrison to bring together.

Which I think goes back to why critics have liked this book: because Grant Morrison’s writing it, and he’s such an ahead-of-the-curve writer that whatever he does must be great. As Myers wrote about critics, there’s a subconscious instinct that you must appreciate writing you don’t understand.

Myers’ take is much more simple: If writing is too complex and self-referential to appreciate, then it’s not very good.