The Godfather’s Alex Rocco returns to his mobster roots in Batman: Year One 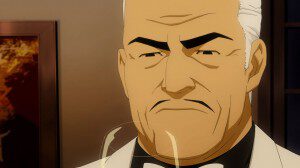 Alex Rocco, best known for his role as gangster Moe Greene in The Godfather, returns to his mobster roots as Carmine Falcone in Batman: Year One, the next entry in the popular, ongoing series of DC Universe Animated Original Movies.

The appearance in a Dark Knight-related project brings Rocco’s 44-year career full circle. The Massachusetts-born actor, who was once an adjunct member of Boston’s Winter Hill Gang, got his first on-screen role in the 1960s Batman television series.

Rocco appeared as the thug Block in the back-to-back episodes “A Piece of the Action” and “Batman’s Satisfaction,” which premiered on March 1 and 2, 1967.  The episodes also featured the first true crossover appearance of Green Hornet and Kato on the Batman series (aside from a cameo popping out a window in the first season).

Since then, Rocco has been seen on primetime in everything from Get Smart, The F.B.I. and Kojak to The Mary Tyler Moore Show, The Rockford Files and Baretta. He has had recurring roles on The Facts of Life, The Famous Teddy Z, Sibs, The George Carlin Show and The Division. His voice is easily recognized as Roger Myers Jr., the head of Itchy & Scratchy Studios on The Simpsons.

In feature films, Rocco’s most notable roles include Moe Greene (and his gruesome demise) in The Godfather, the comically curious police chief in The Stunt Man, and as over-the-top Sol Siler, the head of Playtone Records in That Thing You Do!

Rocco, an agreeable and funny man in person, spent a few extra minutes after his initial recording session to chat about mob bosses, Burt Ward’s whining, Julie Newmar’s sex appeal, and how to get ahead in Hollywood when your bartending partner takes a bathroom break. Take note … Moe Greene, er, Alex Rocco is speaking. 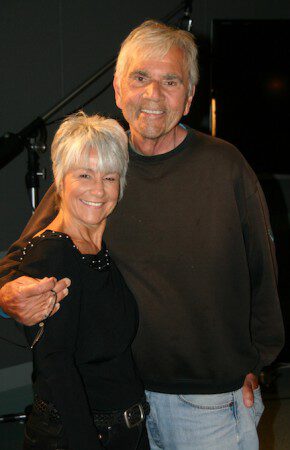 QUESTION: You’re no stranger to gangsters. How did you choose to interpret Falcone?

ALEX ROCCO: I always seem to play everybody’s dad or the gangster. So Falcone to me was like one of the five families from New York, maybe Vito Genovese, somebody like that. He takes his food very seriously, his drink very seriously, his women very seriously. The bottom line is he’s a scumbag, but he thinks he has a lot of class, so I tried to incorporate that.

QUESTION: So you really don’t mind being typecast as a gangster?

ROCCO: Not at all. Whatever pays, that’s great. I like comedy and I like gangsters. I always had trouble with love scenes. I’m so insecure. But playing gangsters is great. They usually dress you sharp. And you have a license to pretty much bully anybody. I mean, I wouldn’t dare do that at home. My wife will give me a back hander. So doing it at work is a great release – it saves you all that money at the shrink.

QUESTION: Is it true you had some real-life experience with gangsters and the mob back in your young days in Boston?

ROCCO: I come from a place called Winter Hill, and I was kind of a wannabe gangster. I started off running errands for the guys that were always dressed nice in the long collars with their initials. They called me Bobo, and it was always “Bobo, go get me a milkshake” or “Go grab me the newspaper,” and they’d throw me a few bucks. Plus I learned a lot from the gangsters. Things like you never look at another guy’s wife, always leave a good tip, never eat meat on Friday … but you can kill all during the week. 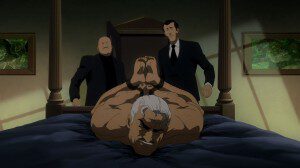 QUESTION: Did your mob experience help you in the entertainment business?

ROCCO: I tried to use that street energy to get started in this business. A lot of actors just wait for the phone to ring, but you’ve got to hustle. I don’t mean you have to be overbearing, but you have to stay on top of things – read the trades, know what’s going on in the town.  I call it “dare to be stupid.”  The worst thing they can say is “We got nothing for you.” So I’ve hustled a lot in the 44 years I’ve been doing this.

QUESTION: How did hustling get you that first gig on the Batman television series?

ROCCO: I’d worked at the Rain Check Room – an actor’s hangout – for a while. You’d see people in there like Robert Vaughn, Shelley Winters and Rock Hudson, who used to comb his hair the other way to try and be incognito. I was one of the two main bartenders along with an actor named Arch Whiting, who was down the other end (of the bar). He worked on Voyage To The Bottom Of The Sea and Batman, just about any series at that time. Mike McLean was a casting guy at 20th, and he used to call for Arch. I knew the routine. He’d call Arch and ask, “You available – I’ve got one line for Bottom Of The Sea.” I was a little jealous and I never really loved Arch that much. So one day, Arch goes to the bathroom and the phone rang. It’s Mike from 20th and he’s looking for Arch. I said, “No, he’s on vacation in Mexico. What are you calling for?” And he said he had something for him for Batman. And I says, “Hey, I did eight Naked City’s for Gold Medal” – knowing that  Gold Medals Studios in New York had burnt down, and they can’t get the footage to check me out. I said, “I’m a hell of an actor.” And he said, “Pay is 150 bucks and it’s two lines.” And that was my first gig. I stole the Batman gig and it turned out it was a two-partner where they introduced The Green Hornet and Bruce Lee, who ended up teaching my kids martial arts. So yeah, it was funny – when they called and asked if I wanted to be in this picture, I flashed back on 1966. So this is fun. 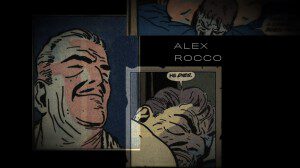 QUESTION: Do you have any special memories from your Batman TV series experience?

ROCCO: Adam West was terrific. The kiddo that was a pain in the ass was Robin. The director would say “Grab his wrist and hold him up against the wall,” and then the kid would whine, “He hit my wrist.” And Adam looked at me and said “He does it to every actor.” I remember the villain Roger C. Carmel, and Julie Newmar was on set. Oh man, Julie Newmar — I had such a crush on her. She was in costume in the commissary, and I was just smitten.

QUESTION: Did you ever read comics?

ROCCO: As a kid, I’d go down to Murray’s Drugstore in Boston – I’d just kind of turn the rack around and around, looking at all the comic books. I’d buy them and read them, then me and my buddies would trade them. I never did think of them as a collectors’ item, but I loved buying them. I had great Batmans and Supermans, and I always thought they were better than baseball cards. It was fun getting baseball cards, but a comic book is an adventure.

I liked Captain Marvel and Superman, as well as Batman. I’ve got to admit that I learned a lot from reading this script – I never really knew Batman’s whole backstory with the death of his parents, all of that. I was really drawn in. Now I want to know more about Bruce Wayne in this mythology.

When I was a kid, though, it was Captain Marvel – because he was the one that, when he said “Shazam,” he would change. It was magical. And he’s always looked nice. I’ve always wanted to look like Captain Marvel. So my favorites were Captain Marvel, Superman and Batman. And I’ve got a little bit of love for Wonder Woman because, you know, just look at her. Plus she’s got an invisible plane.  How can you beat that?