Review: ‘After 9/11’ by Sid Jacobson and Ernie Colón 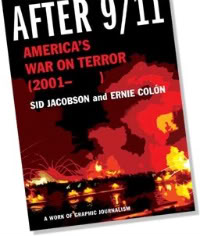 A few years back, Sid Jacobson and Ernie Colón came up with the novel idea of retelling the 9/11 Commission Report

Now they’re back with something of a sequel, After 9/11: America’s War on Terror

(Hill and Wang, $16.95). While their earlier book was a simple recreation of an existing document, this is a more impressive endeavor, as they compile facts from a great number of sources to create one of the most encompassing yet looks at our ongoing wars.

I really only have one criticism. The book is labeled “graphic journalism,” which is a bit of a misnomer. The creators did no original reporting, as far as I can tell, instead researching media reports for their information.

It’s really an illustrated work of history, an encompassing paper-bound documentary of the past seven years in American foreign policy. Which is to say it’s a pretty depressing read.

The creators organize their collection of news reports and government documents in chronological form, as the U.S. launches its invasions of Afghanistan and Iraq, the latter through no small part of deception.

It can be a laborious read, if only because of the density of information and the lack of a streamlined narrative. Jacobson approaches the project inclusively, noting such relatively small events as fairly minor acts of diplomacy.

But because of the book’s illustrated form, it’s pace always stays far quicker than that of, say, one of Woodward’s tomes on the Bush administration.

I have a feeling that as the years wear on, [[[After 9/11]]] will only become more valuable as our society will undoubtedly look back more and more at what went wrong. There are no revelations here, but it is one of the best single sources of information.

It’s only real limitation is that it ends before our overseas entanglements. Of course, there can always be another installment.