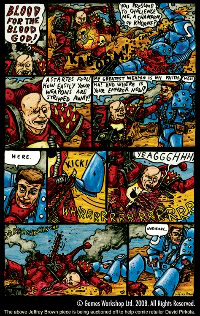 Earlier this year, retailer David Pirkola was seriously injured during a robbery of his comic shop in Kentwood, Mich. He’s still recovering, and now Boom! Studios and Jeffrey Brown are launching a benefit auction.

Brown is a customer and friend of Pirkola, and he partnered with Boom and iFanboy.com to do a tribute page of the Warhammer 40,000 comic, which you can see at right.

The auction is now running, and you can find it right here.

Brown is best known for his book The Incredible Change-Bots. Here’s his thoughts from a press release:

"I became a father a year and a half ago, so it’s been a while since I’ve had the time to field my Ultramarines force or let my epic scale ork gargants rampage across the battlefield," said Brown. "I keep up with the comics, novels, and White Dwarf magazine, but spend more time playing with buses and trucks now. It was a great experience to work on this page and get back to the game that I love, and it was even better knowing I could help David by doing it."