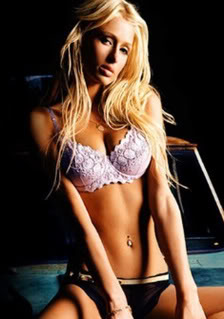 MTV’s new Splash Page comics blog has some bizarre news about a partnership between Stan Lee and Paris Hilton. Let that sink in for a second or two.

Apparently the oddest dynamic duo are working together on an animated superhero spoof show for MTV. Details:

“We’re developing that right now and just going over scripts and drawing my character,” Hilton told us. “I fight crime.”

The infamous party girl will soon be seen in the upcoming twisted musical “Repo! The Genetic Opera” where she lampoons beauty-obsessed celebritities as a plastic surgery-addicted brat, and Hilton proclaimed her next target will be the capes-and-cowls crowd.

“It’s not like your typical superhero,” she promised of her Lee-created character. “It’s me basically as a superhero, so kind of using makeup and compacts as weapons. It’s kind of like a spoof on a superhero.”