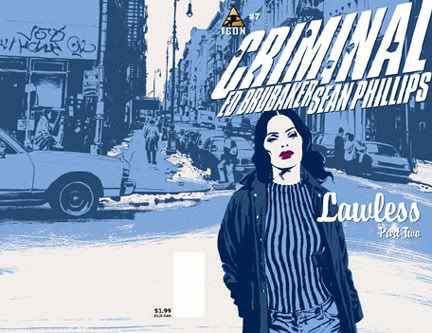 Talk about impossible to pass up: Here’s an interview between two pretty brilliant crime writers, Ed Brubaker and Duane Swierczynski.

It originally ran in Crimespree magazine, issue 22. Here’s a sample:

DS: Since Scene of the Crime, many of your regular series have been infused with this great crime/noir vibe—Sleeper was pure noir, Gotham Central was hardcore police procedural, and so on. Is “crime” the lens through which you view much of life?

EB: Yeah, and espionage, a bit. My dad and his brother (who I’m named after) were both in the intel field. My uncle was a big mucky-muck in the CIA and my dad was in Naval Intelligence. Not that either of them were ever forthcoming with details about what they did, but it probably accounts for my interest in that genre. And when I was a teenager, I was kind of a thief and a drug-addict. I did a lot of things I’m not proud of, and lived in a really ugly world of speed-freaks and scumbags for a few years. Nearly going to prison straightened me out, though. Scared the shit out of me at 18, basically. But you never forget sitting in the felony tank with 50 other guys fighting over sandwiches.

So, when I started writing stories for other people to draw, I just always thought of crime stories. Just before my first paying work, in 1991, I had read a lot of the Jim Thompson reissues from Black Lizard and had been on a real true crime binge, so that probably played into it a lot. But I think on some level, I identify with criminals, even though now that I’m older and a home-owner, I hate them. I never liked any of the ones I knew, really, it was just the life I fell into. I like the ones I make up, but they’re much more romantic than the criminals in real life