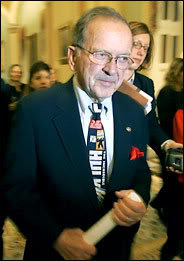 This is pretty funny stuff. Sen. Ted Stevens, the Alaska Republican who’s being investigated for lots of financial improprieties, was photographed by Doug Mills of the New York Times wearing a Hulk tie (see at right).

Over at his blog, former Hulk writer Peter David has this to say:

The embattled senator has been depicted wearing a Hulk necktie based on the cover of Hulk #401, written by yours truly. Apparently it’s his favorite tie when he’s in trouble. I’m starting to get an inkling of how Rowena felt upon learning that her art was a favorite of Saddam Hussein. In the words of Groucho, it’s a club that you really would rather not be a part of since it would have you as a member.

The comments are pretty funny, including this gem:

He likes the theme because he’s often quoted saying, "Don’t make me Ted Stevens. You wouldn’t like me when I’m Ted Stevens."