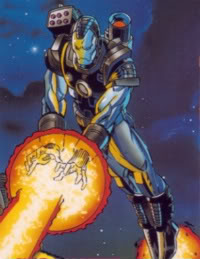 No huge news yet from Marvel in San Diego, but they did reveal a few upcoming projects at Thursday’s creator-dominated panel, according to various reports.

CBR’s Andy Khouri was there, and listed off the major news:

[Kevin] Grevioux and [Mat] Broome will be coming out with a new title called "Adam: Legend of the Blue Marvel." It’s about a black superhero in the late ’50s and early ’60s, who is the most popular hero in the country — but he wears a mask to hide his skin color. When he is revealed to the public as a black man, President Kennedy calls the Blue Marvel to the Oval Office and implores the hero to stand down so as to not disrupt the ongoing Civil Rights movement. Blue Marvel agrees and forty years later his greatest villain returns, and Blue Marvel is the only one who can stop him. The miniseries begins in November and runs six issues.

Grek Pak will write "War Machine," a new ongoing series illustrated by Leonardo Manco. The title will replace the outgoing "Iron Man: Agent of SHIELD." "You will soon see the humanity of Jim Rhodes and War Machine. The book will be HARD. CORE. Around the world, tyrants and madmen are committing the worst atrocities imaginable. Jim Rhodes is going to take on the responsibility of taking them on upon his giant rocket-equipped shoulders." The book begins in December.

A fan complimented the cosmic books – Nova and Guardians of the Galaxy – and asked if they’re going to intermingle with the rest of the Marvel Universe. McCann said there were "really big plans" for Marvel’s outer space characters (and not just the ones in the aforementioned two titles), and said more will be revealed at the Secret Invasion panel Saturday.