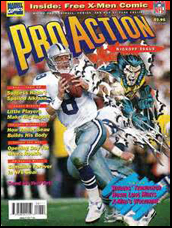 No, this is not a column about that. Get your minds out of the gutter, people!

I was working in the Special Projects department at Marvel Comics as an assistant editor when my boss, Executive Editor Bob Budiansky, called me into his office.

“I have something for you that will be absolutely perfect,” he said, “because you’re the only one in the department who will really appreciate it. I talked about it with Tom (DeFalco) and he agrees with me.”

“Okay,” I said, a bit apprehensive and yes, curious.

“The NFL approached us about doing a magazine aimed at kids who love football.”

“Okay,” I said, getting excited.

“It’s going to be like Sports Illustrated For Kids, only concentrating on football, of course.”

“Each issue will also feature a full comic, plus news, articles and tidbits about Marvel.” “Okay,” I said, really trying to stay dignified.

“You’re going to be the editor.”

“O-KAY!!!!” I said, totally forgetting about dignity and professionalism and giving Bob a hug.

NFL Pro Action had its debut at Super Bowl XXVIII, January 30, 1993, where the Dallas Cowboys met the Buffalo Bills in Atlanta’s Georgia Dome for the right to claim the Vince Lombardi Trophy (Dallas won, 30 – 13). More than 71,000 fans found a copy of the magazine waiting for them in their gift seat cushions packs. Wolverine and Cyclops also distributed copies of NFL Pro Action at the inaugural NFL Experience, a celebration of football that has now become an annual four-day event, starting on the Thursday before the game and ending after the game on Super Bowl Sunday.

It was a true labor of love for me, for, as regular readers of this column know, I am a die-hard Big Blue fan and lover of football, having grown up in a family in which every Sunday during the season revolved around going to the game. My Dad got tickets to the Giants from a buddy of his who worked at the now-defunct Jersey City Herald-Tribune newspaper when he returned stateside from World War II.

The magazine had a broad mix of pop culture, trends, NFL and Marvel-related topics, including a comic. The kick-off issue of NFL Pro Action featured Troy Aikman about to get sacked by Wolverine, who was tearing through the cover. (Yeah, Wolvie hates the ‘Boys, like any good Giants fan.)  In addition to an Aikman profile and trading card inserts of NFL superstars and Marvel’s super heroes, the magazine also included a look at the “little people” (5’9” and under) of the NFL, including the great Cowboy running back Emmit Smith at 5’9” and Barry Saunders of the Detroit Lions at 5’8”, an article about the Punt, Pass & Kick program which had been recently revived and spotlighted NFL players who had participated in PP&K as kids, an opening day photo shoot of Niners rookie Ted Kelly and – especially poignant yesterday – strength tips from the late, great, 10-time All-Pro, 12-time Pro-Bowler and member of the NFL 1990s All-Decade Team Junior Seau – yes, I met him, too, and he was also a wonderful, wonderful man.

Each issue of NFL Pro Action also included a 16-page custom comic and the premier issue starred the X-Men and Howie Long – who held up a copy of NFL Pro Action on FOX NFL Sunday, got a ribbing from Terry Bradshaw, and said that his kids were more impressed with his appearing with the X-Men than anything else he had done. The story, by Ralph Macchio, Chris Maarinin, and Keith Williams, with lettering by Dave Sharpe and colors by Ed Lazzerlli, featured Wolverine getting his ass whooped by Long in the Danger Room – the X-Men’s holographic “gym” – and then, humbled yet inspired by this encounter with the NFL star, Wolverine used what he learned from Long against the evil mutants called Morlocks, who live beneath New York City in forgotten subway tunnels.

It also featured Rogue’s Tailgating Tips. Turns out Rogue “favors baby back ribs smothered in barbecue sauce fresh from San Antonio, dim sum, shrimp dumplings, and sticky sesame rolls from Hong Kong, foot-long hot dogs smothered in ‘craut, peppers, onions, ketchup and mustard from Coney Island, and Cajun crawfish, crab legs, and roast pork from the best restaurants in N’Orleans.” Of course, it helps if you can fly to all these places on the morning of the game.

It was a fun gig, and, yeah, there were perks besides going to Super Bowl XXVIII to make any football fan drool. Going to an absolutely scrumptious 12-course dinner with the guys from NFL Properties on the Friday night before the game at a five-star Atlanta restaurant where waiters in white gloves and tuxedos stood behind you and gave you fresh silverware – and I mean sterling silver – for each new plate, and poured a fresh bottle of wine especially picked to match the new cuisine on each new plate, which included a fine champagne to go with the sherbet offered between the lobster and the filet mignon to “wash my palate” – yeah, I got drunk, and it was fun – while sitting next to and yakking with Peter King from Sports Illustrated, meeting Troy Aikman and Steve Young and Emmit Smith (again) and Sam Huff and Junior Seau (as mentioned) and Alex Karras and Dan Reeves and John Elway…

And the big wing-ding, ultra-faaaaabulous Saturday night Super Bowl party, at which I met a member of the Atlanta’s city council, and had an interesting conversation, which went like this:

“Y’know, y’all think we’re a bunch of rednecks, down hyah, but let me tell, sugah, we’all treat our niggers down hyah a hell of a lot bettah than y’all do up there in Hymietown.”

“Thank you, I’ll be sure to tell my rabbi that.”

And the guy who thought I was a hooker, and followed me back to my room expecting to get action.

That kind of action.