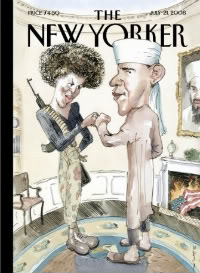 Over at the Comics Reporter, Tom Spurgeon has done quite a service by compiling the thoughts of a huge (HUGE) number of comics creators on the controversial cartoon gracing the latest issue of the New Yorker.

You can see the image at right. It shows a Muslim, militant Obama and his wife in the Oval Office, giving a fist bump as the flag burns in the fire and a picture of Osama bin Laden hangs on the wall.

Paul Pope is one of the respondents:

I wonder if you are somehow sensing a connection to the Dutch cartoonist case. If anything, this again reconfirms the power of the pen, and how this ancient tool of protest and satire can be used to such controversial and potent ends. I applaud The New Yorker for this.

There’s tons more, and it’s all worth a read. Personally, I’m an Obama supporter, and I really like the cover. I’ve read so much about the stupid mistaken "facts" being perpetrated about Obama (like this story in the Washington Post by my pal Eli Saslow) that it’s a relief to see them so effectively caricatured.