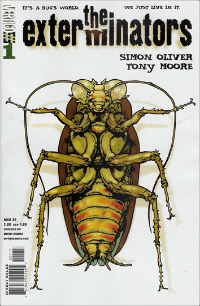 Simon Oliver and Tony Moore’s bug-annihilating comic series The Exterminators appeared to have taken a lethal dose of RAID, with this month’s issue #30 scheduled as the series finale.

But the story, which was originally pitched by Oliver as a TV series, now comes full circle as it will live on in televised form on Showtime. The Hollywood Reporter has the story:

Showtime is reteaming with "Dexter" executive producer Sara Colleton for "Exterminators," a drama project based on the comic by Vertigo/DC Comics.

Created by Simon Oliver and Tony Moore, the comic centers on an ex-con who joins an exterminator company, working with a freakish supporting cast of characters. A mystery surrounding his girlfriend and the manufacturer of an insect poison percolates on the periphery, and the insects are much more dangerous than they seem.