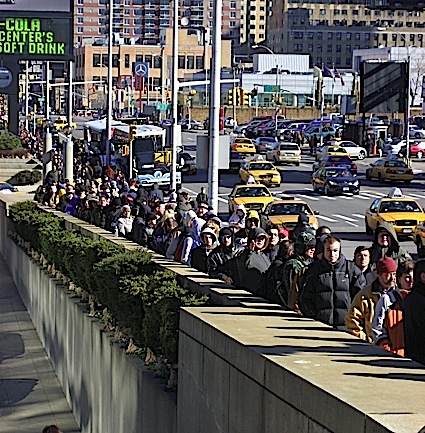 If you were planning on coming to New York Comic Con today and you aren’t reading this from the line outside, you might want to consider turning around and going home. The convention staff is not letting anyone without exhibitor passes on the floor without standing in a line outside, in single digit wind temps.

If you got in line right at 10:00 AM, you won’t get in until after noon. That said, being in the line isn’t quite so bad because many high profile artists are stuck in the line as well. A person who identified themselves as a DC artist trying to get to a booth signing was told that his professional badge would not get him on the floor — “your day was yesterday.”

The line started at midnight Saturday morning and is currently half a mile long.  Despite the promoter’s promises of twice as much space it seems that the 2007 con is marred by the same problems of overselling that made the last show a living nightmare. New York State troopers have been called out and are handling crowd control. Fire marshals are threatening show closure.

Reed Exhibitions, the company that runs the show, is the same company that runs Book Expo.  The contrast between the managment of that show and this show is shocking. You wouldn’t see this sort of conduct there and for good reason, that show is run professionally and not by a legion of clueless volunteers.

One con worker noted that they’ve been trying to get more space from Javitz — on top of the doubling from last year — but Javitz did not have the space. The convention promoters held the show this weekend despite this criminal lack of space.

Fans waiting outside in line had already purchased their tickets.