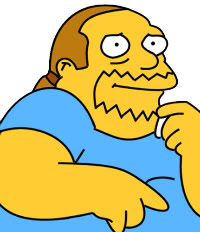 For anyone who hasn’t seen The Simpsons, that’s the comic shop owned by the Comic Book Guy, the obese, stinky, rude resident nerd on the show.

From the article in the Franklin Park Herald-Journal:

As such, he wants to change some of what he describes as stereotypes in comic book stores.

"Many have this weird funky smell, the owner is a jerk and won’t even let you look at the books," Munoz said. "I want to convert this to a different style of comic store."

His ideas include bringing in comic book creators for signings, selling original comic art, showing comic based movies in the store, adding gaming and perhaps a small cafe.

"I want to bring in people who wouldn’t normally come into a comic book store," Munoz said.

Now, a lot of those ideas aren’t the most novel, but I’m curious what other comic book buyers think about their shops. How inviting are they, especially to non-traditional comic book readers?

And, alternately, for retailers, what are you doing to entice new readers?