Seriously, folks — [[[The Spectacular Spider-Man]]] animated television series on the “Kids WB” network is one of the best superhero adaptations I’ve ever seen (and trust me, I’ve watched more than anyone will probably consider reasonable). It’s fun, it’s smart, it’s mature, it’s witty and every episode leaves me wanting more.

cartoon series so succesful. Teamed up with him in developing the series for television is Producer and Supervising Director Victor Cook, whose resume includes working on the Hellboy animated film Blood and Iron

and producing the animated series based on the popular [[[Lilo and Stitch]]] animated feature film. Together, they have brought us a series that is updated for the modern-day audience but is completely faithful to the spirit and atmosphere of the first several years of [[[The Amazing Spider-Man]]] comics.

How does it compare to Sam Raimi’s interpretation of [[[Spider-Man]]] as someone who whines, mopes and cries a little more often than I’m comfortable with? Forget him. This animated incarnation of Peter Parker is a true New York teenager, cracking jokes on instinct — even when it’s not necessarily the wisest move.

For example, let’s talk about a brief scene from the first episode. The high-flying villain known as the Vulture grabs businessman Norman Osborn and tosses him to his death from a great height. Spider-Man shows up, catches Osborn in mid-air and remarks, “You guys play hot potato hardcore!” The Vulture screams that the skies belong to him, forcing Spider-Man to concede, “He may be right. I only rent.”

Now that’s the kind of dialogue and Bugs Bunny-like attitude I wish I’d seen out of Tobey Maguire.

But that’s not the only difference between this Peter Parker and the moper from the movies. Like the original Stan Lee creation, he loves the freedom of web-slinging through the city, flying over the heads of bystanders with agility and speed none of them can match. He takes no small joy out of mocking super-villains who are in love with their own power.

But it’s not all fun and games. He never has any money, he can’t beat up the jocks who torture him without revealing his powers, and half the time he has to call his Aunt May while he’s in the middle of a fight in order to explain why he’ll be late for his curfew. He also has to deal with alienating friends who can’t trust him when he’s unable to explain his absences or occasionally odd behavior. 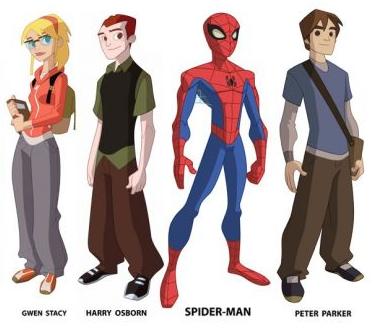 One of the major attractions to Spider-Man among fans has always been how funny and relatable the character was, and this show provides that in spades. Several moments in each episode have me laughing out loud. Peter’s constant bad luck with simple things brings on flashbacks of high school when a lot of us always seemed to just miss the mark of what we wanted. He gets a great internship, only to find out it doesn’t pay. Becoming Spider-Man boosts his confidence, but he still can’t get a date because his first two years of high school have already labeled him as a nerd. And despite the fun he has in many of his adventures, he is still haunted by the fact that his arrogance once cost him his uncle — and that if he screws up at the wrong time, someone may die.

The show is rounded out by an excellent supporting cast. You’ve got Peter’s hilariously maternal Aunt May and his friends Harry Osborn, Gwen Stacy, and Eddie Brock. And on the sidelines, you’ve got folks such as Harry’s father, Norman, the irascible publisher/editor J. Jonah Jameson, his assistant Betty Brant, and Dr. Curt Connors. There’s also the mysterious Mary Jane Watson, who Peter’s aunt really wants him to meet, assuring him that she has a “wonderful personality” (a phrase which causes our boy to react in fear). The voice talent is great, with actors such as Josh Keaton, Lacey Chabert, Josh Lebar, John Dimaggio, Phil Lamarr, Robert Englund, Clancy Brown, Jeff Bennett and Vanessa Marshall.

A clear sign of the maturity and intelligence of the series is how the characters themselves are written. Although no one curses and there’s occasional unwarranted exposition, a lot of the dialogue is on par with a modern-day drama for young adults. It’s clean, simple and natural. The teenagers sound like teenagers, not dumb, smaller versions of adults.

Likewise, the villains are treated well rather than simply being classified as pure evil. You can’t justify their crimes, but you do understand what brought many of them into their darker way of life and how some of them just started out misguided. The criminal Norman Osborn is still able to impart some not-too-bad advice to his son Harry and even school jerk Flash Thompson will occasionally take a break from making fun of Peter and show genuine concern and loyalty for others around him. Characters here are complex and their relationships with each other and themselves change and evolve over time in ways that make sense. If only more live-action drama was handled this way.

What’s more, this is definitely a series and not just several episodic adventures thrown together. Each episode lays groundwork for things to follow later in the season. Peter learns about an opportunity to earn money by taking pictures of Spider-Man, he spends a couple of episodes trying to accomplish this seemingly simple task, constantly screwing up. Also, while comic and movie fans know that Harry Osborn, Norman Osborn and Eddie Brock will all eventually become enemies, their rivalries with our hero are subplots that are slowly touched on and developed over the course of several stories, rather than immediately being shoved into place.

In the recent films, Peter has seemed only mildly interested in science, perhaps as much as the next guy who watches a lot of Discovery Channel specials. In this show, he’s the talented would-be scientist Stan Lee created. He builds his own web-shooters and often times defeats his enemies with his brain rather than just a well-placed punch. He’s passionate about it, too, as we learn from witnessing him explain to a girl he’s tutoring that science is about finding the connections in life.

What’s more, this is not a universe where villains randomly get powers just in time for Spider-Man to conveniently wail on them. Many of the super-villains in this series are connected by their circumstances. The show also uses an idea that was retconned into the comics a few years ago, that Norman Osborn himself funded the operations of several villains. This gives the series a slight soap-opera feel, in the best possible way, like many great comic books themselves.

For diehard comic book fans, the show remains faithful to the Spider-Man comics (they even remembered to give the Chameleon a Russian accent). While the animation style is a bit goofy on first glance, I’ll admit feeling the same about Bruce Timm and Paul Dini’s amazing Batman the Animated Series

at first, too — so it’s something I let slide, given how the latter turned out. And while I understand and agree with the method of bringing in characters that Peter originally didn’t meet until college and beyond (such as Harry and Gwen), I am a bit hesitant about having him and Eddie Brock be childhood friends, since we all know what Eddie’s ultimate fate will be. Sure, it’s just a personal bias of mine, but I prefer when there are some arch-enemies who have no history with the hero beyond their initial introduction and conflict. Fortunately, the show handles the character in a way that makes sense and still brings us a faithful version of the monochromatic psycho comic readers know and love.

All in all, The Spectacular Spider-Man is a great series, and you’re only depriving yourself if you’re not watching it. Oh, and the theme song’s pretty catchy, too! And if you’re interested in more info, check out my interview with Greg Weisman concerning the creative forces behind the new series.

Alan Kistler is still waiting for a live-action movie based on the parody character “Peter Porker, the Spectacular Spider-Ham.” He has been recognized by Warner Bros. Pictures and mainstream media outlets such as the New York Daily News as a comic book historian, and can be seen in the “Special Features” sections of the Adventures of Aquaman and Justice League: New Frontier DVDs. His personal website can be found at: www.KistlerUniverse.com.