Samurai! Zombies! The Supernatural! And Zorro! Oh my! 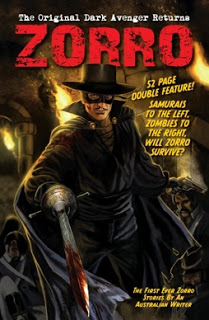 “This may be the boldest and most daring Zorro comic ever created! Could this be the basis of the next Zorro movie?”
John Gertz President Zorro Productions

Silver Fox Comics: Australia’s most action packed independent comic book publisher debuts with a new series for the legendary Zorro!  This is the first Zorro story written by an Aussie and features newly commissioned art, which will build into the most action packed Zorro comic ever produced. As Issue 1 proclaimed “SAMURAIS TO THE LEFT, ZOMBIES TO THE RIGHT. WILL ZORRO SURVIVE?”

ISSUE 2 OUT NOW!
Our 2nd issue of Zorro is now on sale at newsagents nationwide and select comic stores! Issue I on sale on this website and at all good comic stores. This comic is sold exclusively in Australia only.

WRITER SORAB DEL RIO DISCUSSES ZORRO
“This Zorro takes on many modern day themes, such as drugs, persecution of indigenous races, and the supernatural, whilst still retaining the classic iconography and swashbuckling action. This isn’t a safe licensed-to-Walt Disney mainstream Zorro, and it isn’t aimed at kids. This is Zorro, as it should be done. It’s pulp fiction style, rough, gritty and dangerous. It’s East meets West, with the supernatural, all-out fights, drugs, samurai warriors, beautiful women, zombies, guns and blades. This has opened a new path for the Zorro legacy which is the start of an epic, darker, action- packed Zorro, the likes of which have never been conceived before.

New characters emerge, such as Mirella, a gypsy fortune teller who becomes Zorro’s gateway into the supernatural world, the villainous General Cypher is introduced, who sets out to destroy the native Indians, The Beast – merciless tax collector, Yoshiko, the Empress of Opium, Ashikaga her samurai guard, and Carmelita – a dream of a woman you would kill for.
The first issue we released features two stories:  The first story, The Defeat of Destiny, sees Zorro uncover a plot, by the new Spanish regency Cypher, to begin importing and farming opium in California. The land of the natives is taken by force in order to clear land for opium. The Japanese arrive, an Indian princess is kidnapped, and will be killed unless Zorro reveals his true identity. I wanted to bring historical themes and parallels into the piece, such as with the opium wars in China, and the exploitation and destruction of indigenous races. 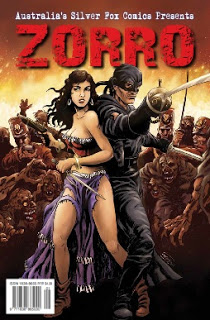 The second story, Love Never Ends, sees an ex-lover resurrected from the dead. When he learns his ex-wife is to be wed again, he seeks revenge. Unlike most zombie films, the zombie cannot simply be killed by a gunshot; it will take a lot more! I’ve also introduced new characters, such as the gypsy fortuneteller Mirella, and a new love interest, Carmelita. I also want to create more of an insight into Zorro over the series. Here, we learn of his penchant for seeing into the future.”

Zorro®, Zorro is © 2011 Zorro Productions Inc. All rights reserved. All names, characters, events and locales in this publication are entirely fictional. Any resemblance to actual persons (living or dead) is entirely fictional, events or places, is coincidental. No portion of this book may be reproduced by any means (digital or print) without the express permission of Silver Fox Comics except for review purposes.
*Edited by request of Publisher and Zorro Productions, Inc.