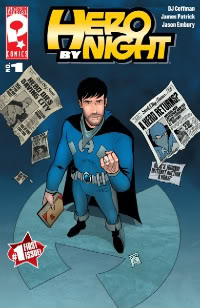 You have to at least admire the resilience of Platinum Studios. Even as they’re raked over the coals for not paying the winner of a past Comic Book Challenge, they push ahead with the 2008 event.

At the Comic Book Challenge Web site, they’ve announced the top 50 in this year’s competition, who will fight on for the right to have their book published by Platinum.

The top 50 entrants, who include people from as far away as India, Singapore and Argentina, will now submit video pitches to be judged by a celebrity panel of industry and Hollywood insiders at a secret location in early August. Platinum Studios will sign the winner to a publishing deal, which will include print, online and mobile. In addition, the company will seek opportunities to develop the property for film and television.

“Moving the contest completely online this year opened it up to many more people, truly making this a worldwide event in which anyone can participate,” notes Scott Mitchell Rosenberg, chairman and CEO of Platinum Studios. “And the wide geographic diversity of the Top 50 is a testament to that.”

Meanwhile, Hero by Night creator DJ Coffman, who won an earlier challenge, writes on his blog that he finally got paid what he was due from Platinum. All it took was dragging Platinum’s lack of payment into public, where the publisher was denigrated en masse.

Fed Ex showed up with a check from Platinum paying me up to date anything that was owed to me, so that whole issue is over with. I’m glad they paid me, and honestly none of this would have blown up for me if I hadn’t nearly lost my house and life banking on or trusting that money would show up on time. It is what it is though, and I learned a valuable lesson that there is no job security anywhere, no matter what a piece of paper says. The envelope included a letter saying my “consultant” agreement with them was terminated as of today, which is fine with me, because in my mind it was terminated when checks never really showed up on time in the terms of that agreement.