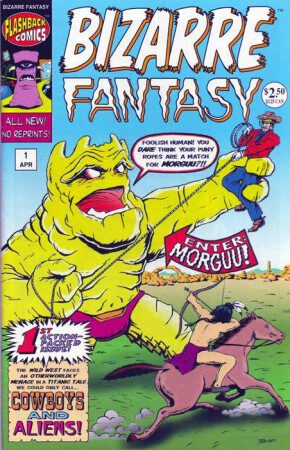 Scott Rosenberg involved in legal problems and accused of theft? What are the odds?

Cowboys & Aliens studios Universal Pictures and Platinum Studios have been sued by cartoonist Stephen Busti, who claims that the graphic novel and Jon Favreau movie infringes on his strip ‘Cowboys and Aliens’, which appeared in Bizarre Fantasy #1 in 1994.

TMZ reports that Busti’s story was spotlighted in a 1995 issue of Comic Shop News on the same page that ran a story about Platinum’s Scott Rosenberg. The studio executive later presented the Cowboys & Aliens concept to the studio.

Platinum produced a Cowboys & Aliens poster in 1997 and sold the rights to the property to Universal and Dreamworks. It did not appear in graphic novel form until 2006.