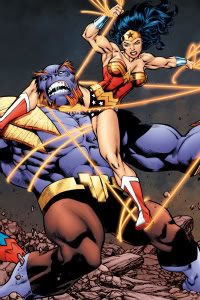 For the first time ever, Kurt Busiek pulled the storylines together and gave a sense of the big things ahead. Not perfect, but much better than the past few.

The fight against Konvikt finally reached an end, as Batman’s smarts helped the big three devise a clever knockout punch. Batman was the star of the issue, also nabbing one of Morgaine Le Fey’s underlings (which look like the rat creatures from Bone), after it had branded Wonder Woman with an omega symbol.

During a brief interrogation (ended by the rat creature self combusting), it says, "You are the trinity. But you are weakened. Breaking. Soon, you will fall." Buh, buh, BUM!

There’s a little character moment that shines, as Batman and Superman are reluctant to advise Diana to see a doctor, and she points out the inconsistencies of gender relations. It makes her character a little more interesting, which is something plenty of other writers have failed to do.

In the backup, a trio of lame villains (Whiteout!?!) try to kidnap Tarot, who has started to see the trinity in her cards (as justice, strength and the devil — guess which hero goes to which card).

They fail, not unpredictably, in large part thanks to the reappearance of Gangbuster. Which, I’ve got to say, is pretty awesome. At the end, we see Morgaine Le Fey’s creatures after Tarot.

Like I said, everything’s coming together nicely, and we have dire warnings galore. So, hope returns, although I’m still curious as to why Busiek feels the need to include only the lamest villains.