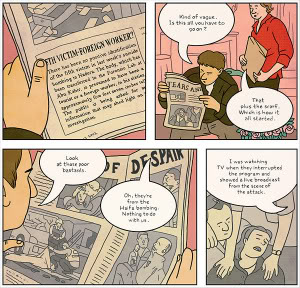 The people over at The New York Times Magazine clearly have a great sense of the contemporary comic book scene. Earlier this year they picked up a new series by Jason (of I Killed Adolf Hitler fame), and now they’re debuting a new series by Rutu Modan, whose graphic novel Exit Wounds was one of the best books of 2007.

The ongoing strip, The Murder of the Terminal Patient, is kicked off with a selection of Modan’s comics, which you can view right here. One of the pages is at right, from Exit Wounds. The first chapter of Terminal Patient is also available to download as a pdf.

As with much of Modan’s work, it’s set in Israel. So far, it features Dima, who emigrated from Russia and works as a nurse in a hospital.