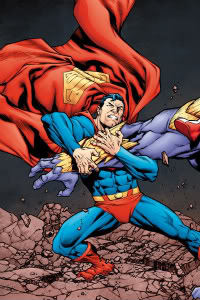 We’re up to week five of DC’s big weekly event, and I regret to inform you that I’ve already caught myself thinking "same old, same old."

The fight with Konvikt continued, with all the heroes getting knocked around, including your Big Three. At least they took the fight away from civilians, but still, so far the main point seems to be that there’s nothing really special about Superman, Wonder Woman and Batman. They get their butts kicked by giant, purple aliens just like everyone else.

Quick tangent — I’m not sure if there are any other Weeds fans out there, but I find it impossible to read the name "Konvikt" and not immediately think "Dumb name" in Doug’s snarky voice.

Back to the issue, which was pretty breezy, it ends with Batman doing some detective work to take a new tack with Konvikt (dumb name), and then getting ambushed by another alien, Graak (really dumb name).

Meanwhile, villains Morgaine Le Fey and Enigma (who needs to just come out of the Two Face closet and admit to being  Harvey Dent) watch on their magic crystal ball and offer cryptic commentary.

Let’s not forget the backup story, which again features vague heroine Tarot. She’s still seeing scary future stuff, and she (like us readers) still has no idea what the freak it all means.

Tarot does dream about Despero violently taking over some alien planet, and since Despero is apparently supposed to join the evil trinity, I guess I should be excited to see something that has the appearance of relevance. Maybe it’s just Scott McDaniel’s crappy dream sequence art that’s throwing me off.

I’d like to offer more of worth, but there’s honestly not much else to say. This series is overwhelmingly OK, but it’s still only whispering at the big event that shouted from the opening pages of the first issue (when the mysterious space voice called out).

It’s not a good sign that after five issues I still don’t really know what this story is about. After all, the most dominant character so far has been Konvikt (dumb name).