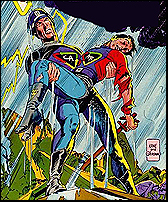 Please refer to last week for part one.

When last we met…

Off to Gertz we went! Gertz was the department store back in the day. When we got there my mother walked right to the toy department and brought me Captain Action and the Batman and Superman costume changes.

At that point I had to wonder, who was this woman and what had she done with my mother.

This was entirely way to good to be true.

As I would find out soon it certainly was.

I found out later that, what was a great Saturday turned crappy, why my mother was so quick to buy me Captain Action, which I just knew, was the last thing I would ever want or need.

My stepdad (who at the time I thought was my real dad; long sad story) told my mother earlier in the day he would not be picking me up to spend the night with him. Those times with my father were all I lived for.

If I had to choose between having Christmas every day and spending one day with my dad, Santa would have lost out.

My mom didn’t tell me that on the bus ride back. Nor did she broach the subject when we got home. She missed the opportunity while I was introducing the good Captain to my GI Joes. Introduction may not be the best word for the Joe exchange.

I evicted a platoon of Joes from a few of my GI Joe footlockers. The good Captain and his costume changes could not be made to spend his down time in a ghetto toy box. The toy box was where the poor toys lived.

Anywho, my mom never did tell me that my father wasn’t coming over – which was most likely her plan. The toys were a distraction. A distraction that was working until my sister asked me if Robert (That’s what we called my father, not dad or daddy. It’s a black thing you wouldn’t understand) brought me the toys.

Just like that I remembered that I was supposed to spend the night with Robert and realized that he had not picked me up yet.

My mother was then forced to tell me that he was not coming and I started crying like baby.

Then something magical happened, my mortal enemy, my sister Sharon picked up my Captain Action and started taking to me about it. After a few minutes I was proudly explaining what my new toy was showing her the costume changes and schooling her on all the reasons Captain Action was just the greatest thing that ever happened to the world. I’m not sure when I stopped crying or when I forgot Robert was not coming over.

Then, I was an adult.

That what happens in life one moment you are a five-year old with the greatest toy you have ever had the next you are a grown man trying to recapture those moments by becoming a collector of the things from your childhood that brought you that wonder. My Captain Action collection features the Ideal Toy Company original. The Prying Mantis 90’s redo and the current Captain Action Enterprise’s new line.

DC Comics did Captain Action comics back in the day and the good Captain has been returned to the industry those books are in stores now and I hear big plans are planed for comics in the future.

Yes, this article and part one is my love letter to an old friend who has always been in my life. It’s sappy, I’m sappy and I know that.

Sappy is the new black.